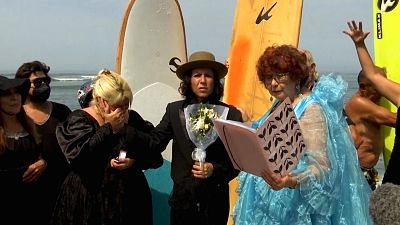 A Peruvian activist has married the sea in a moving protest against the 2022 Callao oil spill.

The symbolic ceremony was held at Makaha beach, Lima - a short distance from the site where over 11,000 barrels of oil were overturned into the sea on 15 January 2022.

"We are carrying out a symbolic action,” says Richard Torres, the activist behind the declaration of love.

“I have married the sea to demand respect for our most important natural resource, where thousands of beings are housed, who have been attacked by the terrifying oil spill that occurred in the sea of ​​Ventanilla."

It has been described as the nation’s worst ecological disaster in recent decades.

Torres demanded authorities "take responsibility” for the maritime tragedy, which has been described as the nation’s worst ecological disaster in recent decades.

A wedding in the waves

During the ceremony, Torres “promised to respect and love the sea” for the rest of his life, before throwing himself into the water amid a flurry of applause.

Well-wishers included local actors, environmentalists and surfers - many of whom want to see Spanish oil giant Repsol held responsible for the tragedy.

"This sea belongs to everyone,” says Ricardo Garcia, a local activist, “the rich, the poor, the athletes, the fishermen, those who sell ice cream, those who sell popcorn."

So far, over 170 seabirds have died as a result of the disaster, while fishing activities in the area have been suspended indefinitely.

I promise to respect and love the sea for the rest of my life.

Repsol originally claimed that 6,000 barrels of oil had been lost overboard - only to increase this number at a later date.

The company is now blaming the leak on unusual waves triggered by the volcanic eruption in Tonga, more than 10,000 kilometres away.

Watch the video above to see the wedding ceremony for yourself.