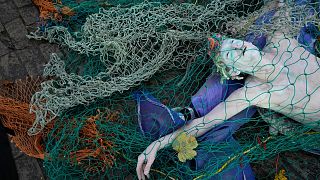 We're now halfway through the long-awaited COP26 climate summit. Leaders from around the globe have been taking part in the landmark negotiations in Glasgow, looking at how to tackle the planet’s growing climate catastrophe.

With the likes of UK Prime Minister Boris Johnson, US President Joe Biden and French President Emmanuel Macron in attendance, political and environmental protests have begun to dominate public spaces across the Scottish city.

From Squid Game themed performances to nautical displays of sea pollution, these protesters have used some imaginative visuals to disrupt the COP26 landscape.

In pictures, we took a closer look at the performances and costumes being used by campaign groups such as Extinction Rebellion, to cause a stir in the name of climate justice.

Audiences also witnessed the arrival of climate activists such as Melanie Nazareth, who walked the 800-kilometre journey on foot from London.

Raising awareness of plastic waste and the future of our oceans

Ocean Rebellion protesters across the city conducted an elaborate performance installation. Actors were encased in fishing nets, discarded toys and other plastic waste washed up on the UK’s shoreline.

Pokémon come to play...and call out Japan's reliance on coal

Activists dressed as the Pokémon character Pikachu appeared on the banks of the River Clyde on Thursday morning - energy day at COP26. The group were protesting Japan's support for the coal industry.

With another week of activities to go, we'll be keeping our eyes out for more incredible and innovative costumes from across Glasgow.