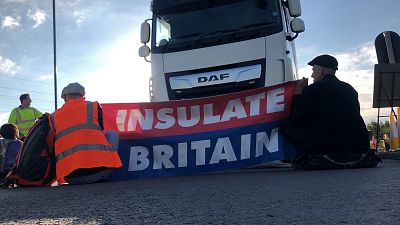 Climate activists have been blocking sections of the UK’s busiest motorways, as well as the port in Dover.

Their tactics, which have caused disruptions to traffic and transport, have faced criticism and led to dozens of arrests.

Insulate Britain’s aim, according to an organisation spokesperson, is simple. Speaking with Euronews Green, they explain that they want the “government to start the most cost-effective means of reducing our carbon emissions, by insulating the nation's housing stock.”

Insulate Britain’s website explains that the UK’s 29 million homes account for 15 per cent of the country’s emissions. But also that they are “the oldest and least energy-efficient housing stock in Europe.”

An organisation spokesperson tells us that the aim of the campaign is for the government to agree to insulate UK properties, starting with social housing, and to insulate them all by 2030.

This, they say, will save lives, create meaningful jobs and reduce carbon emissions.

Not only would implementing insulation changes enable the UK to make good on its promises to meet climate change targets under the Paris Agreement, but Insulate Britain also says it would mean that more than one in 10 families in fuel poverty could heat their homes and cook food.

Children are hungry and cold, thousands are dying and people are denied meaningful jobs. Marching, letter writing, and petitions have not worked.

However, the Extinction Rebellion (XR) offshoot has been largely unpopular thus far, facing a great deal of criticism from both the government and the public, with dozens of protestors facing arrest.

Despite this, the group is firm on the fact that its tactics are both necessary and fair. As one spokesperson tells us, “It is only by causing disruption that we have been able to put the conversation on the national agenda.”

‘Nothing else has worked’

Their tactics, which have been likened to those of Extinction Rebellion (XR), who in the past blocked London transport and landmarks, have faced significant criticism. Ecological philosopher and green activist Rupert Read explains both the public and media reaction has been hugely negative so far, “even more so than with XR.”

This was a concern for Insulation Britain, but as their spokesperson explains, “We did not know what else to do.”

Insisting that the simplest, most effective carbon reduction issue is not being implemented, they say.

“Children are hungry and cold, thousands are dying and people are denied meaningful jobs. Marching, letter writing, and petitions have not worked.”

Since the issue is one that has not been much discussed in the public eye, an organisation spokesperson says there has been no real support to lose with their unpopular methods of protest.

Nonetheless, those such as Transport Secretary Grant Shapps have jumped to Twitter to take out their anger. “Invading a motorway is reckless & puts lives at risk,” he wrote. “I asked National Highways to seek an injunction against M25 protestors which a judge granted last night.”

They added that two of their campaigners have been placed on remand, with one granted bail today (Friday 24 September).

"‘Insulate Britain’ is a completely understandable response to our predicament, but it is fantastically unlikely to be a successful one,” explains Read, writing on the reactions to the protests.

“At best, it is likely to make XR seem a bit more reasonable, but that will not be enough to bring the wide step-change we need.”

Despite this, an Insulate Britain spokesperson insists, “There is no evidence that disrupting in this way means that people no longer believe in climate change, or would prefer not to insulate their home. Many previous disruptive campaigns were deeply unpopular in their time, and it is only with time that they have been seen as acceptable.”

There is no evidence that disrupting in this way means that people no longer believe in climate change,

The real extremists, they say, are those who call for moderation and who “continue to hide the enormity of the change which is now our common future.”

Speaking with Euronews Green, Read sympathises that “Insulate Britain deserves a positive response because they are brave people who are actually doing something. Any armchair critics should put themselves on the line before they criticise.”

However, the group has been condemned by the government it hopes to sway.

Boris Johnson says their methods detract from their aims and recently told reporters “I don’t think these people do any favours to their cause. I think that what they do is detract from a very important moral mission that is widely shared by the people of this country.”

Insulate Britain says they will end their protests when meaningful action towards their aims has taken place.