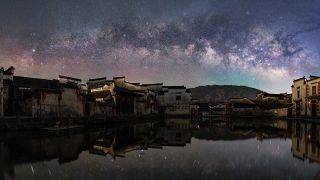 The shortlist for 2021’s Astronomy Photographer of the Year has been unveiled by Royal Museums Greenwich. From radiant Lunar Halos in Sweden to California Nebulas, this year’s selection is more dazzling than ever.

The competition, now in its 13th year, is widely considered the leading astrophotography competition on the globe.

Commissioned by the Royal Observatory Greenwich in association with BBC Sky at Night Magazine and with 4500 entries spanning 75 countries, making the shortlist is a prestigious feat.

While confined to the great indoors, we took the time to look over the vast and magical images of our solar system. Here’s a look at some of our shortlisted favourites:

The Astronomy Photographer of the Year shortlist

Captured initially in black and white and later processed partially inverted, the image’s vibrancy has marked an impressive start to the new solar cycle.

This photograph, captured in Valensole, France is fittingly called Harmony. Liebermann’s work shows a twinkly Milky Way low in the sky above a lavender field.

After a month of waiting for perfect conditions, the photographer captured this glowing wonder in only a tiny 1.5 hour window.

Shot from both the inside and outside of this icy Icelandic cave, this image depicting the Aurora Borealis from within this freezing formation was a long time ambition for the photographer.

Lit up by the orangey glow of light pollution from nearby dwellings and a passing vehicle, a once every 6800-year moment was beautifully captured at the UK’s Stonehenge.

Separated by a row of Hui style architecture, a pearlescent Milky Way reflects down upon Yuezhao Lake in the ancient village of Hongcun, China. Looming in the background is the famous Huangshan Mountain.

The bicolour processing choice by the photographer shows a romance of colour between oxygen emissions and hydrogen-alpha.

This Icelandic Vortex depicts the Aurora Borealis at its finest. Reflected on the estuary below, the luminous sky display was shot first, then the photographer himself braved it out on the ice. The result is a glowing reflection of the vastness of the natural world.

Shot with a pollution heavy view of Shanghai’s financial district, the sun can only be seen rising during a rare window of a few weeks each year. Taken using four different exposures, the photograph gives a rare glimpse of our sun’s magnificence above a bustling Lujiazui.

Here, this natural rock formation Durdle Door in Lulworth, United Kingdom, can be seen under an umbrella of the sparkling Milky Way. Saturn and Jupiter lurk on the left periphery of the photograph.