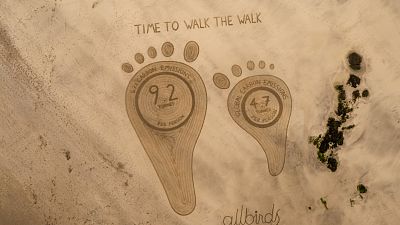 Giant footprints have appeared on a beach in Cornwall to remind the G7 world leaders to prioritise climate policy at their summit this weekend.

Created by sustainable footwear brand Allbirds, the prints show the average emissions per person for the G7 countries compared to the rest of the world.

The ratio is almost double with the world’s seven biggest economies emitting 9.2 tonnes per person annually versus 4.7 tonnes elsewhere.

Drawn in the sand on Gwithian Bay by Cornish artist One Man and his Rake, the installation is intended to encourage world leaders to “walk the walk” when it comes to sustainability.

“Climate change is the problem of our generation and we need to act now, and act together. If we’re going to successfully tackle this mess that we’re in, we need to step it up a notch and start holding ourselves accountable,” Says Joey Zwillinger, Allbirds co-founder.

“Nobody is perfect - including us - but we need to see the leaders of the G7 use their global leadership position to drive down their carbon footprints today, leading the way in the climate crisis.”

Leaders of the G7 countries are meeting in Cornwall this weekend, the region was chosen due to its centrality to Britain’s green technology industry.

Originally convened in 1975 the G7 - which includes Japan, Italy, France, Germany, UK, USA, Canada - is made up of the world’s largest ‘advanced’ economies. Since its inception, leaders of these countries have met once a year to discuss important issues of the day, with the exception of 2020 when meetings were held online due to the COVID-19 pandemic.

The meetings happen behind closed doors but a communique is sent out at the end of every summit explaining what has been agreed, accompanied by an obligatory photo opp.

Although only seven countries take part, there is always a representative of the EU present at talks and this year South Africa, South Korea, India and Australia have also been invited. Russia was formerly a member (when the group was called the G8) but was removed after the annexation of Crimea.

China is not included as, despite it’s large economy, it does not have a high enough wealth per capita ratio.

Can the G7 change anything?

While unable to make laws, G7 agreements can be very influential.For example in 2002 they set up the Global Fund for AIDS and Malaria.

The agenda this year will likely focus on COVID recovery and climate policy ahead of COP26 in Glasgow, however an agreement has already been reached on a revolutionary minimum corporate tax policy.

Overtures have been made on building back better and developing green jobs and resilient economies.

Other items on the agenda for the G7 summit include:

How concrete the agreements they come up with will be remains to be seen.

Who is protesting and why?

The G7 always attracts protestors from various causes and this year is no different.

Established in February this year, the Resist G7 Coalition is made up of local, national and international groups who all want to provide an alternative to the summit. The group’s members include Palestine Action and Stop the War Coalition.

Likewise, the Extinction Rebellion is expecting to pull 1000 people to Cornwall to protest the summit.

The first climate strike since the beginning of COVID lockdowns is also being organised with Fridays for Future and Cornwall Youth Climate Alliance planning a demonstration on Gyllyngvase Beach.

With controversy over handling of protests around the world all eyes will be on the 5,000 extra police officers stationed in Cornwall for the summit. They have committed to ‘proportionate response’ after police used tear gas against protestors in Paris in 2019.