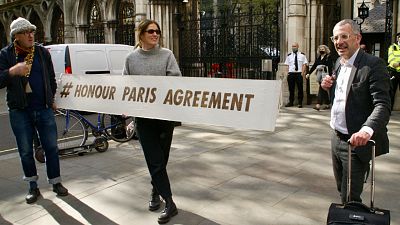 Activists say the UK's oil and gas regulations do not hold up their end of the Paris Agreement   -   Copyright  Courtesy of Extinction Rebellion   -
By Shannon McDonagh  •  Updated: 12/05/2021

A coalition of climate campaigners has announced a legal challenge against the UK government over oil and gas policies.

Three activists, who have received public support from the likes of Extinction Rebellion, Greenpeace, and the UK Student Climate Network, are applying for a legislative review of the government’s updated oil and gas strategy.

They are arguing that the government’s policy of “maximising economic recovery” of oil and gas in the North Sea is illegal because it fails to consider the billions of pounds in tax breaks spent propping up the industry.

A campaign, titled Paid to Pollute, was launched today in recognition of the legal challenge.

Let’s make sure the polluter pays, not the other way around 📣

How will the legal challenge work?

The group will bring to task the policy failures that have allowed multinational companies to continue to profit off oil and gas production to a scale they believe is in contravention with the pledges made in the Paris Agreement.

This would allegedly make the UK the only company Shell operated in last year that it did not pay tax into at the height of the pandemic. The campaign argues that this relief should be invested in the country’s green economy going forward.

Environmental podcaster and medical student Mikeala Loach revealed herself to be one of the three activists in the case through a video posted to Twitter.

BREAKING: I'm taking the UK government to court to pull the plug on public payments for big polluters. In recent years companies like @Shell and @bp_plc were actually #PaidToPollute. We think the polluter should pay, not us. Support our case here: https://t.co/kAfe1B7cmFpic.twitter.com/ysVhseCg4X

“In the year that the UK hosts the G7 and COP26, now is the time to stop using public money to subsidise climate collapse. It is time to lead by example and fund a just transition away from fossil fuels,” they explain.

The trio will be represented by law firm Leigh Day.

“Our clients’ case is that the OGA’s new strategy encourages companies to produce oil and gas without considering the economic repercussions of that on the public purse and the UK as a whole,” says a representative for the firm.

“This means that, in some circumstances, such production is not ‘economic’ for the UK as a whole, but the OGA is still seeking to maximise it.”

Paid to Pollute has opened up its campaign up to the public, encouraging co-signs on a petition addressed to Prime Minister Boris Johnson and Business Secretary Kwasi Kwarteng.

The group has also set up a donation page for their case.