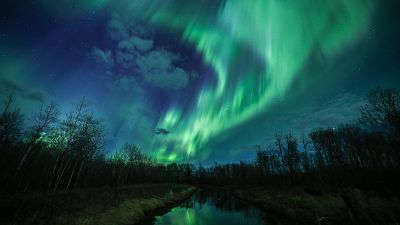 The winners of the Northern Lights Photographer of the Year have been published. The stunning selection of 25 images shows off the colourful and otherworldly Aurora Borealis.

These natural lights are caused by solar winds hitting the magnetic field around the planet. When the electrons and protons from these solar winds hit particles in the Earth's atmosphere, they release energy. It is this energy that causes the aurora.

These fascinating light displays can often be seen in polar regions around the Arctic and Antarctic. The best time to see them is during the autumn and spring equinoxes in places which are free from light pollution.

Travel photography blog, Capture the Atlas has just published its annual collection of the best Northern Lights photos. The Northern Lights Photographer of the Year aims to bring people closer to this stunning phenomenon so that they can understand more about how they happen.

This year, the photos were taken across countries such as the US, Russia, Norway, Iceland and Antarctica by photographers of 18 different nationalities. Capture the Atlas editor, Dan Zafra chooses images throughout the year looking for new talents and images taken in places that haven't been photographed before.

Check out some of the images from the Northern Lights Photographer of the Year below.

The Kola Peninsula is a region of Russia north of the Arctic circle. For more than two months of the year, it is blanketed in the polar night with only the Northern Lights to brighten the sky.

"I found this stone beach on the coast of the Barents Sea a few years ago," Korolev adds.

"At the time, I was mesmerized by the shape of the boulders, which moved with the rumble of the ocean waves, as well as the steep mountains rising from the sea."

Photographer Dennis Hellwig took this photo on the Lofoten Islands in Norway. The region is known for its dramatic scenery with mountains, open seas and beaches.

"I was able to stand through a hole in the stream and use the tripod to bring my camera close to the icicles," says Hellwig. "It was so tight that it was almost impossible to work with a tripod. I also had to make sure that my tripod legs didn’t break the ice."

"Another challenge was the light pollution from passing cars (it was only 8 pm and there were still a lot of people on the road) and other photographers with their headlights on."

"But in the end, everything went well and I got my picture."

“Ghosts of the Fell”, Petri Puurenen

Believe it or not, these ghostly figures captured by Petri Puurunen are actually trees. The snowy candle spruces can be up to 10m tall and weigh several tonnes when covered in snow.

"The weather forecast promised clear skies and refreshing -24ºC temperatures, so what could be a better way to spend a night like that than hiking up to the Fells and photographing trees covered with hard-packed snow?" Puurunen says.

"The half-moon was illuminating the scenery, so the conditions were nearly perfect. While wandering around the area and searching for compositions, the Auroras were slowly climbing up to the sky, fading away just ten minutes later."

Benjamin Eberhardt's image shows an aurora over the IceCube Neutrino Observatory in the South Pole. It is made up of thousands of sensors under the Antarctic ice and which detects particles called neutrinos in order to study our cosmos.

"The South Pole is probably one of the most remote and challenging environments to do photography, and it is strenuous for both humans and technology," says Eberhardt.

"To achieve 24h-long time-lapse shots, you need some creativity to heat and insulate your equipment in order to keep it running, and even rotating, in temperatures ranging down to -80ºC (-112 ºF).

"In my case, this was a learning curve over multiple months, with a lot of trial and error and frostbite. On the upside, once you have tackled all the challenges, you have plenty of reasons to be proud of your shots."

Although the Northern Lights, of Aurora Borealis, tend to get much more publicity, the spectacle can be seen in the southern hemisphere too. The Southern Lights are equally impressive but there are fewer places where it is easy to see them.

"I have had the incredible fortune to witness the Southern Lights twice during two photography trips to Tasmania," says photographer Ben Maze.

"Captured in this image is a trifecta of astronomical phenomena that made for some of the best astrophotography conditions one can witness in Australia, namely, the setting Milky Way galactic core, zodiacal light, and of course, the elusive Aurora Australis.

"On top of this, a sparkling display of oceanic bioluminescence adorned the crashing waves, adding the cherry on top to what was already a breathtaking experience.

"The colours that our cameras picked up were incredible, too. Rather than the classic green, the display ranged from yellow and orange to pink and purple.

"I’m forever grateful for moments in nature like this that show us the true wonders of our planet."

Roksolyana Hilevich also captured the unique and impressive landscapes of the Lofoten Islands in Norway as part of her Northern Lights image. The Ukrainian landscape photographer enjoys travelling and uses nature as her inspiration.

"I found this unknown place on the Lofoten Islands as I was moving around the Gimsoya Islands," she says.

"That night was very cold, with temperatures reaching -20º C. It was probably one of the best shows of watching and photographing the Northern Lights I’ve ever experienced because, in a place like this, it’s not easy to find something new with such a magical foreground and the kp5/kp6 (minor to moderate geomagnetic storm) Northern Lights dancing all night long."

"Lights in the Land of the Living Skies", Jeanine Holowatuik

"I captured this image during a surprise aurora storm that came out of nowhere near the end of May in the boreal forest of Saskatchewan, Canada," says Janine Holowatuik. Saskatchewan has some of the darkest and clearest skies in all of North America and is known as the land of the living skies.

"The show was strong, and the lights were visible in every direction at its peak, which doesn’t happen often at my latitude," Holowatuik adds.

"I was able to stay close to home, watching in amazement as the lights reached further south. It was a warm spring evening and I captured the Lights dancing right until the morning light, a night I’ll never forget!"

You can see the rest of the winners and read the stories behind how they were taken here.

Is this just a wave or the face of Poseidon, God of the Sea?