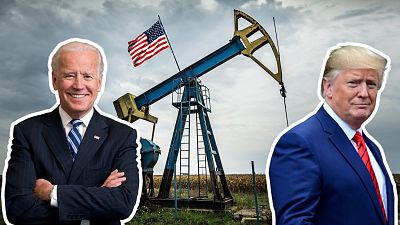 If you've been following coverage of the US election over the past few months, it's likely you've heard the term 'fracking' bandied about. But what exactly does it mean, and why is it so important in this year's election?

What does fracking mean?

Hydraulic fracturing (or fracking) is simply a technique for extracting natural oil and gas from the ground. A highly pressurised liquid is blasted at the hard rock which lies within the Earth's crust, fracturing it to create cracks through which gas and oil can flow through and be extracted.

It's used to access reserves of oil and gas buried under deep-rock formations, and has allowed the US to become one of the world's leading crude oil producers, after Russia and Saudi Arabia.

The technique has existed since the 1940s, but its use has grown exponentially over the last 30 years. Supporters say it helps reduce countries' reliance on coal, instead using natural gas which emits less carbon dioxide when burned.

But environmentalists and other critics don't feel the pros outweigh the cons.

As fracking has grown in popularity, so too have methane leaks.

In 2018 the Environmental Defense Fund (EDF) found that the leakage rate in the state of Pennsylvania amounted to around 1 million tonnes of methane pollution annually. This is significantly higher than the 64,000 tonnes which were officially reported by stakeholders involved in Pennsylvania's fracking industry.

Methane is an even worse greenhouse gas than carbon dioxide, as it traps 25 times more heat in the atmosphere than carbon dioxide. Gas fracking wells in just one county in Colorado were found to be leaking the equivalent of 1-3 million cars.

But methane isn't the only problem. Other air contaminants are also released during the fracking process, including carbon monoxide, particulate mater, and formaldehyde. Exposure to these chemicals is known to cause serious illnesses like cancer.

It's not just the air which is polluted either, groundwater is at risk of contamination from fracking.

In 2008, people in a small town in Wyoming began complaining that their drinking water smelled foul and that it was making them sick. It took eight years and several investigations - including inspectors from the Environmental Protection Agency (EPA) halting research - to find that the residents were being poisoned by chemicals used in the fracking process. A drilling operation was taking place very close to the drinking water supplies near the town of Pavillion, and a chemical called benzine was found to be in the water at over 50 times the permissible limit.

Away from pollution, it's also been found that fracking can induce seismic events, like earthquakes. In the English county of Lancashire is the UK's only active fracking site. In the space of two days last year, the area recorded the two largest earthquakes ever in the UK.

In August 2019, there were four seismic events in 11 days around the site run by Cuadrilla. During the previous year, there were 57 tremors during 60 days of fracking in Lancashire, according to Friends of the Earth.

What has this got to do with the US election?

If you've read this far, you might be confused why this is remotely relevant to the 2020 election - but fracking is a major factor in which way the vote could swing.

The oil and gas industry makes up a significant part of the US economy, supporting nearly 10 million jobs - or around 6 per cent of total US employment. Fracking has been a huge part of fossil fuel's success in the US, allowing for rapid growth in oil and gas specifically.

More than 1.7 million wells have been completed in the US using fracking, which equates to over 7 billion barrels of oil and 17 trillion cubic metres of natural gas. The US Chamber of Commerce says that projected fracking will create more than 3.5 million jobs by 2035, at the current rate.

Joe Biden is favoured to win in Pennsylvania, Colorado, and New Mexico - but not Ohio.

Much of these existing and projected jobs are in a handful of key states, including the battlegrounds of Pennsylvania, Ohio, Colorado, and New Mexico. These four swing states have strong support for fracking, with thousands of residents employed in the fossil fuel industry.

According to polling aggregator FiveThirtyEight, the Democratic presidential challenger Joe Biden is favoured to win in Pennsylvania, Colorado, and New Mexico - but not Ohio. However in all four of these states, the race is unbelievably close. Pennsylvania carries 20 electoral college votes (out of a possible 538, with 270 needed to win) which means voters in PA have a significant part to play in deciding the overall outcome of the election.

So could it all come down to fracking?

Incumbent president Donald Trump is vehemently in favour of fracking. Last week he told a rally of supporters in Pennsylvania that he had just signed an executive order to protect fracking - on the flight over to the event.

In reality, Trump actually only signed a symbolic memo in support of the sector, rather than enacting any legislation. The move is largely ceremonial, instead issuing a memorandum asking his government to study the impact of "prohibiting or sharply restricting the use of hydraulic fracturing and other technologies."

At the same rally, Donald Trump repeated a previous claim he had made that Joe Biden wants to outlaw fracking, calling his rival an "economic death sentence for Pennsylvania."

In truth, Joe Biden hasn't pledged to ban fracking, something which has earned him criticism from environmentalists.

His campaign have said they would not allow new permits for oil and gas drilling on public land, but Joe Biden has repeatedly said he is not in favour of banning fracking. The Democratic candidate has instead pledged to move away from fossil fuels, promising a $2 trillion (€1.72 trillion) package to combat climate change and create green jobs in the USA.

The question is, could Biden's commitment to transition away from fossil fuels still be enough to rile voters in states where the industry remains a cornerstone of the local economy?

Donald Trump: The man behind the MAGA swagger