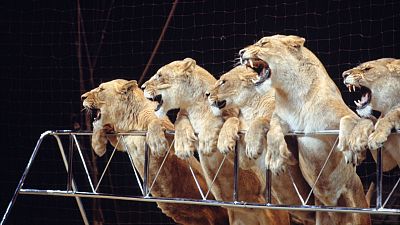 The Hungarian National Circus has transformed into a five-acre safari park in order to stay afloat during the COVID-19 pandemic.

The circus is home to 100 animals who usually perform on stage to an audience. But since the global health crisis began, it has suffered as social distancing measures mean shows have been cancelled altogether.

Instead of having to shut their doors completely, the circus has now become a safari park in Szada, on the eastern edge of Pest County in Hungary. The park is allowing people to come and see the animals from the comfort of their own cars.

Animals from two of the largest travelling circuses, the Hungarian National Circus and Richter Flórián Cirkusz are currently located at their winter accommodation. In a Facebook post about the park’s opening, the circus commented that “the beautiful environment and exotic animal park offers a unique opportunity for a safe outdoor experience”.

Animals at the safari park include elephants, giraffes, camels and two “zonkeys”, a cross between a zebra and a donkey. Videos from the circus’s account on TikTok, a popular video-based social media platform, show people feeding and interacting with the animals from their cars.

After closing down due to the coronavirus pandemic, the new safari experience is helping the circus to survive by continuing to entertain visitors from a distance.

Hungary has a long tradition of circus arts, with Budapest hosting an International Circus Festival every two years. The Hungarian National Circus was given an award last year which recognises those who follow best practice. A high level of animal welfare is included in the criteria used to judge the award alongside requirements for proper staff training.

The ethics of animal performance

Some animal rights groups, however, believe that even with assurances of high welfare, the use of animals in performances is damaging to their wellbeing. They say the pandemic could offer an opportunity for circuses to transition away from shows involving animals.

PETA is a group that has long campaigned for an end to using animals in circus shows. It states that the life of these creatures is well outside of the freedoms available to them in their natural environment and that using them for entertainment is exploitative.

“These long-suffering animals deserve to be retired to reputable sanctuaries,” PETA’s Senior Media Officer, Jennifer White told euronews Living, “but if they are now receiving proper care and have some semblance of freedom, that beats being chained, caged, and made to perform under threat of punishment.”

PETA urges the circus to “stop exploiting animals for the sake of entertainment and to use this time to train willing human entertainers – like jugglers, trapeze artists, fire-eaters, and clowns – who can dazzle crowds and don't have to feel the sting of a whip to make them perform.”

Increasingly countries are moving towards circuses that see human performers take front and centre. After a rare white tiger allegedly escaped from its enclosure and was killed in Paris in 2017, the city voted to stop allowing acts involving wild animals. Coming into effect at the end of 2020, the legislation will be backed by a ‘financial support’ of €50,000 over three years, and will help circuses that agree to give up their animals to adapt to performances without them. While public opinion supports a nationwide ban, the rest of France is yet to make a decision on the issue.

The use of wild animals in circus performances is currently banned in 27 countries worldwide including The Netherlands, Greece, Scotland and England. The outlier in the UK is Wales, which is yet to bring in the legislation, but that is likely to change soon. Ahead of legislation that would win the country a place on this list, a report from the Welsh government concluded that any benefit to education was “at best likely to be marginal”.

The report found that interactive animal shows would be detrimental to public perceptions of wild animals, particularly for children, and prove a hindrance to conservation efforts.

Park Szafari was contacted for comment on the ethics of animal performance but is yet to respond.