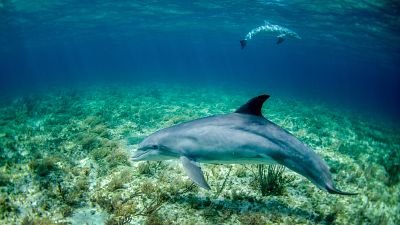 Marine adventure company workers dived into the waters off the coast of Florida's Key West to rescue a baby dolphin in distress.

Crew and holidaymakers sailing in Fury Water Adventures' catamaran spotted a pair of dolphins - a baby and an adult, presumably its mother - acting oddly while trying to observe the animals in their natural habitat.

It soon became obvious the younger bottlenose dolphin was tangled in a lobster trap line, and was struggling to make it to the surface to breathe.

Captain Ryan Fredrick steered towards them, while crew member Joe Suiro radioed authorities to get permission to jump in and free the trapped animal. Appreciating the imminent danger, those on-shore gave the crew approval to perform whatever lifesaving measures necessary.

Crew members Tomas Reiber and Abbey Brewster quickly jumped into the water and approaching the stricken pair over a reef, said the captain.

While Abbey stayed close to the mother in a bid to reassure her of their good intent, Tomas swam towards the terrified infant who attempted to get away but was prevented by the fishing line it was tangled in.

Tomas was able to get close enough to cut the line a few feet from his tail, leaving the pair to swim away freely and continue on their journey.

"I have been captaining boats for years and I have never seen anything like it. This baby dolphin was dragging a 75-pound (34kg) lobster trap that was preventing it from reaching the surface and it was clearly drowning," said Captain Fredrick.

Toilet tales and ducks for neighbours: Life on a canal boat in London

The group fighting deforestation by building from wood