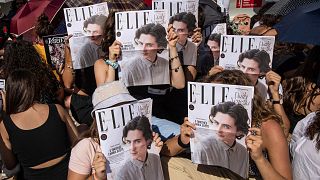 Fans congregate in front of the red carpet ahead of the film premiere of "Bones and All," which stars Timothee Chalamet   -  Copyright  AP Photo
By Jonny Walfisz  •  Updated: 25/01/2023

The latest Apple TV advert is the final objective proof that Timothée Chalamet is this generation’s Hollywood leading man.

There’s so many reasons why, so bear with me as I unpack it for you.

A lot of people would have you believe we live in an era unadorned with the kinds of leading actors that would drive butts into cinema seats on the sheer gravity of their billing alone. It used to be Leonardo. Before that it was Brad and Depp. Cruise and Clooney had their time, and going even further back you get the Brandos and Deans of cinema history.

The leading man is a cultural phenomenon that has seemed in crisis of late. With basically every major star of the last decade ultimately rising to prominence through the endless slew of superhero theme park rides, their unique charismas are inevitably dulled by the uniform brush of monolithic franchises.

Yes, we have any number of Chrises - Hemsworth, Evans, and Pratt - to front the glut of glib blockbuster flicks. But where a leading man used to carry a film on his shoulders, now the financial imperative of these franchises carry the actor along for the ride. And that’s a damn shame.

The leading man is truly a vital staple of the Hollywood scene. Proven nowhere better than Tom Cruise’s revitalisation of 80s schlock in ‘Top Gun: Maverick’. Without him, it would have still been an exciting film with excellently filmed dogfights. Something about the inclusion of Cruise himself has moved the needle though and now the sequel is up for Best Picture at this year’s Oscars.

“Part of the Marvel-ization of Hollywood is… you have all these actors who have become famous playing these characters. But they’re not movie stars. Right?” Quentin Tarantino recently said. “Captain America is the star. Or Thor is the star.”

Moving outside of Marvel’s threat to the Hollywood leading man, the other threat is the growth of television as a prestige medium. While superhero films are generally depriving the public of high quality films and slowly disintegrating people’s perceptions of what films are for, television has really picked up the slack in offering actors meaty roles to get their teeth into. Pretty much every huge name has helmed a prestige Netflix, Amazon or HBO show at this point.

Whether it’s actors like Andrew Garfield taking on a Mormon detective in ‘Under the Banner of Heaven’, Kate Winslet as a hardy detective in ‘Mare of Easttown’, or Matthew McConaughey as the severe police officer in ‘True Detective’; all the big Hollywood names have swapped out quality drama film roles for their equivalent in television. I don’t know why it always seems to be detectives either.

Where Timothée Chalamet comes into it all.

He’s avoided all of this. The man is a pure cinema star. In an era defined by high quality television drama and lots of low quality film trash, he’s managed to craft a career as a surprisingly bankable serious lead on the silver screen.

Chalamet has managed to rise to prominence entirely through unique roles. First rising to prominence for his gentle youthful seriousness as Elio in ‘Call Me By Your Name’, he’s proven his chops in comedy with roles in ‘Lady Bird’ and ‘Don’t Look Up’.

So impressive is the leading man power of Chalamet that when he does star in a major sci-fi adaptation as Paul Atreides in 2021’s ‘Dune’, it’s far from the neutral family-friendly enjoyment of the Marvel universe. It’s really a marvel that Chalamet hasn’t ended up in either a tiresome franchise or a streaming hit like similar generational talents as his Dune co-star Zendaya who came to prominence through ‘Euphoria’ and ‘Spider-Man’ alike.

Every time Chalamet features, the film seems to be raised in esteem just the same as similar actors of previous generations did. Whether it's his star power anchoring the austere 'Dune', his romantic-horror dynamism leading 'Bones and All' or his twinky prowess driving sales for 'Call Me By Your Name', Chalamet is a force to be reckoned with.

Chalamet’s inclusion in the latest Apple TV ad is therefore significant. Over the course of 90 seconds, Chalamet pokes at his own career while expressing his surprise at the success of Apple TV films, tv series and documentaries. It reaches a peak when he sees an ad for the upcoming Apple TV Martin Scorsese film ‘Killers of the Flower Moon’ that will star his 90s equivalent Leonardo DiCaprio.

Later this year he will star as a young Willy Wonka in a completely un-asked-for prequel to Charlie and the Chocolate Factory. But let’s ignore that for now.

The advert reminds me of George Clooney’s Nespresso shorts. Just like those, they trade on the sheer magnitude of the celebrity at the centre of them. Here, the joke is that Chalamet is such a big star, it’s inexplicable that he hasn’t featured on an Apple TV product yet.

If Chalamet wasn’t so immediately synonymous with the kind of star power of a Hollywood leading man, the punchline wouldn’t come close to landing. But it does, because he is.

Love TV? Here are the top ten European series to watch in 2023

Oscar red carpet: Who walked so Timothée Chalamet could run?