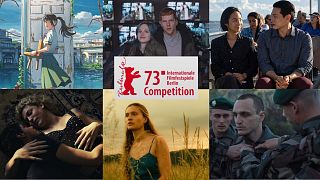 The International Berlin Film Festival, Europe's first major cinema showcase of the year, has announced its Competition line-up for the 73rd Berlinale.

Six of the films are directed by women, three are debut features and 11 filmmakers have had their works selected by the Berlinale previously (eight in Competition). Once again, the 50/50 split between male and female directors in the Competition line-up has not come to fruition, but the Berlinale remains head and shoulders above its European A-list festival counterparts Cannes and Venice in this respect.

Among the Competition titles are the Sundance-premiering Past Lives by Celine Strong, Makoto Shinkai’s animation Suzume, and the thriller Manodrome about a masculinity cult from South African director John Trengove, whose previous film The Wound opened Berlin’s Panorama strand in 2017.

There's also the much-anticipated Ingeborg Bachmann – Journey into the Desert, Margarethe Von Trotte’s film starring Vicky Krieps as Austrian poet and author Bachmann. It is the first film by the acclaimed German filmmaker to play in the Berlinale Competition since Heller Wahn in 1983.

French-Iranian director Emily Atef returns to the Berlinale with teenage love story Someday We’ll Tell Each Other Everything, Berlinale regular Christian Petzold also heads back to competition with Afire - following his German hits Undine and Barbara - and veteran French filmmaker Philippe Garrel, who was last in Competition in 2020 with The Salt of Tears, will premiere his family drama The Plough.

As previously announced, the festival will open with the world premiere of Rebecca Miller’s romantic comedy She Came To Me starring Peter Dinklage and Anne Hathaway.

Kristen Stewart will preside over the jury and Steven Spielberg will receive an honorary Golden Bear for lifetime achievement, with his autobiographical film The Fabelmans closing the festival. (Stay tuned to Euronews Culture for a full review of the film this Friday.)

Scroll down for the full Competition and Encounters line-ups.

Solidarity with Ukraine and Iran

Billed as "the chronicle of a film project that reality forced to change into something less controllable but more meaningful", the documentary is about Penn’s travels to Ukraine, his bid to profile president Volodymr Zelenskyy, and how the two-time Oscar winner found himself in Kyiv when the ongoing war with Russia began.

Chatrian said the festival, known for its strong political emphasis, would spotlight several documentaries and feature films from Ukrainian directors, in addition to works from dissident Iranian filmmakers, in a sign of "solidarity".

A Berlinale press release stated that “film festivals are places that strengthen freedom of speech, freedom of expression, and peaceful dialogue.”

“With the ongoing war of aggression against Ukraine, and the courageous protests in Iran, as well as in many other regions of the world, the Berlinale stands in 2023 even more firmly for these democratic values, and remembers victims of war, destruction and oppression all over the world.”

“Like numerous cultural institutions worldwide, the Berlinale has expressed its solidarity with Ukraine and Iran. Solidarity is expressed within the 2023 Berlinale in the sections and initiatives in the film selection and with various events - in part with cooperation partners.”

Rissenbeck and Chatrian revealed that the colours of this year’s Berlinale would be blue and yellow - the Ukraine flag colours.

Additionally, the Panorama selection this year will highlight films as “Tools of Resistance.”

“Content and form are the means used to convey their cinematic responses to complex current events and individual upheavals. The camera serves as a tool, inspiration as a weapon. Images are created that fill gaps and act as important (oppositional) stances in societies,” said section head Michael Stütz.

The 37th Teddy Awards, the world’s longest-running and most important queer film award, will award the Special Teddy for outstanding merits and achievements in queer cinema to the Sunny Bunny Award, the queer film prize of the Molodist Film Festival in Kyiv. The Ukrainian sister award to the Teddy was established in 2001 and is the largest and most important LGBTQI+ cultural event in Ukraine.

Here is the full line-up announcement of the Competition and Encounters sections:

The 73rd Berlin International Film Festival will take place from 16-26 February. Stay tuned for our full preview of the 2023 Berlinale in the coming days, including the breakdown of which titles are this year's hot tickets and potential future winners.