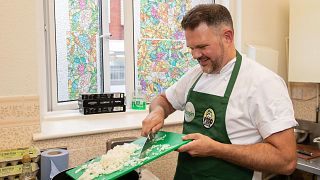 The United Nations General Assembly designated 29 September as the International Day of Awareness of Food Loss and Waste. Euronews Culture speaks to Mary McGrath, the CEO of FoodCycle and 2018 Masterchef UK winner Kenny Tutt about food waste and their new partnership.

Everyone is concerned about food waste but many don’t know how to reduce their wastage.

A study found that 98 per cent of people are concerned about the amount of food that never gets eaten. But despite that, nearly 10 million tonnes of food gets wasted every year in the UK alone.

While a lot of the waste comes from the industrial level, the average UK adult throws away 400kg of food every week, worth around €30. It’s an astronomical waste that’s not just bad for the planet, but also bad for people’s wallets.

As many parts of Europe brace for a cost-of-living crisis over the winter, it’s important that households can make better use of the food they’ve got in their cupboards.

Where has all the food gone?

“The majority of waste actually does take place in the home,” explains Mary McGrath, CEO of FoodCycle, a charity dedicated to reducing food waste, poverty and loneliness.

“50 per cent of food waste takes place in our homes. We buy food, we put it in the fridge, we forget about it, get confused with our dates, and unfortunately, we throw it away,” she says.

FoodCycle runs volunteer-led cooking classes and meals across the UK to help people learn ways to make more efficient use of the foods in their pantries.

The project tackles “food poverty”, the inability for people to get easily accessible healthy food for affordable prices with classes, fundraising events, and community meals.

Just in 2021, FoodCycle saved 191 tonnes of food from going to waste. But it’s not just waste that the charity is concerned about. Through its community meals across 56 locations, they also strive to connect people in local areas.

“Food is a really great leveller,” McGrath says. “By serving really exciting and creative food, it brings people in the door, it makes people want to do something and inspires people.”

One of the most recent FoodCycle events even had celebrity chef, Kenny Tutt, teaching a class. Tutt grew up surrounded by food and won Masterchef UK in 2018. Since then, he’s opened two restaurants in Worthing.

“It was so relaxed and fun. People were getting on so well,” Tutt says, reminiscing on the class he led for FoodCycle.

“My role was about how we can talk about being creative using waste,” Tutt explains, but his expertise was overshadowed by the creativity of the group.

“The way they were coming up with starters, desserts and mains just off the bat. It was like ‘Ready, Steady, Cook’,” he jokes.

“The volunteers just thrived off the creative energy,” McGrath interjects. “It was something very magical.”

While the class was a lot of fun, the reasoning behind the partnership between Tutt and FoodCycle was a critical one. Food poverty is only going to increase over the winter months and people will struggle even more to feed themselves healthily.

Tutt and Boursin Cheese have partnered with FoodCycle to encourage people to utilise their leftover food.

For every Boursin-inspired leftover meal shared on social media, using #youcreatewedonate, Boursin will donate £5 to FoodCycle projects. Every £5 donation will deliver 3.5 meals for the vulnerable in the UK.

Tutt has created recipes for households trying to cut down on their food waste to try out, from a Pumpkin Mac N Cheese that makes use of seasonality as we head into autumn, to a Spaghetti Marinara Frittata that uses up leftover pasta from the day before.

The top most wasted food in Britain is bread, but McGrath points out that just a little creativity can change that.

“You can quite easily turn that into croutons or grate it and use it in crumbles. And you can use it to help either thicken sauces, or to just get some extra nutrients into a dish that you are cooking,” she explains.

Similarly, Tutt is full of tips, like using the rind from parmesan to season a pasta dish.

“We do that a lot in the kitchen. Using the rind gives it a lovely flavour and also, I’m getting a bit cheffy here, it means that the water can then be used to emulsify and thicken your sauces up.”

Both McGrath and Tutt are passionate about getting everyone in the kitchen comfortable to make delicious food for themselves.

“The earlier you start, the more competence you give people to try different things,” McGrath says of how FoodCycle tries to get children involved. “And actually, in terms of not wasting food, it’s great to try and get the children excited and trying food out.”

“It’s a great life skill to go out into the big bad world if you don’t have to rely on instant noodles and can make a pot of curry for your friends,” Tutt adds.

For those days when you do just have leftovers in your fridge and you don’t know what to do with them, McGrath loves to chuck things into a big pot of pasta, while Tutt favours either pies or a spicy curry.

The recipes Tutt designed with Boursin and FoodCycle can be found here.