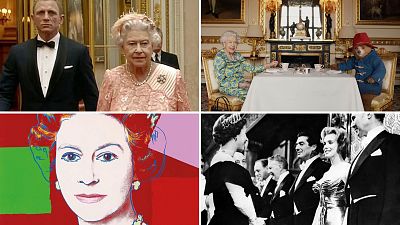 Elizabeth Alexandra Mary Windsor, who came to the throne in 1952, became the UK's longest-serving monarch, after reigning for 70 years.

But she will not only be remembered in the history books, but also for the impact she had in mainstream media as a pop culture icon.

From being immortalised by some of the world's most famous artists, including Andy Warhol and Banksy, to featuring along side Paddington Bear in a sketch for her Platinum Jubilee concert, the Queen's image will be remembered for ever.

Let's take a look at how Her Majesty became one of pop culture's most famous icons.

A muse for artists

The Queen’s image has been captured countless times by some of the world's most celebrated artists and photographers, including Banksy, Lucian Freud, Chris Levine and Annie Leibovitz.

For each of her more than 200 official Royal Collection portraits, the artist was handpicked and their style approved by Buckingham Palace.

Some of the most recognisable portraits of the Queen were created by the leading figure of the pop art movement, Andy Warhol.

His images were based on a photograph of the British monarch taken by Peter Grunion at Windsor Castle on 2 April 1975 for the Silver Jubilee.

Four of Warhol's prints were eventually purchased by the Royal Collection for the 60th anniversary of the Queen's coronation, despite being the only portraits of the Queen in the collection that she did not sit for.

In the summer of 1956, the Queen made one of her most starry encounters when she met face to face with Hollywood star Marilyn Monroe.

The two iconic women (who were both 30 at the time) met at the Royal Film Performance of 'The Battle of the River Plate' at the Empire Theatre in London's Leicester Square.

They shook each other hands and chatted for several minutes about being neighbours and the town of Windsor (Monroe was living in Englefield Green at the time, just four miles from Windsor Castle).

Portrayals in film and TV

There are few people who have been portrayed on the big screen more than Queen.

In 2006, Helen Mirren won an Academy Award for her portrayal of the British monarch in Stephen Frears’ film, 'The Queen'.

The movie is arguably one of the most successful films that the Queen has been fictionalised in - having received high praise from critics and even an Oscar nomination for Best Picture.

Her image has also made some rather unusual film cameos, such as in the animated movie 'Minions' (2015), where she fights off a minion trying to steal her crown.

There's in fact an entire animated film titled, 'The Queen's Corgi' (2019 ), which follows the adventures of Rex, voiced by Jack Whitehall, a corgi who gets lost outside the palace.

Numerous television series have also portrayed the Queen - from brief appearances in Doctor Who and the Simpsons, to Netflix's critical acclaimed and hugely successful 'The Crown', where she is played by Claire Foy, Olivia Colman, and Imelda Staunton.

The Queen didn't always need actors to play her - she made several memorable on-screen appearances herself.

One such occasion was during the opening ceremony of the 2012 Olympics, when she made an unexpected appearance in a comedy skit alongside Daniel Craig playing James Bond.

During the sketch, the fictional spy escorts the Queen and her corgis, from Buckingham Palace to the Olympics in a helicopter.

The Queen reportedly kept her involvement in the scene secret from her family.

Comparably, the Queen most recently appeared in a lighthearted sketch with Paddington Bear for the Platinum Party at the Palace (celebrating the Platinum Jubilee).

In the short clip, the two share afternoon tea inside Buckingham Palace and discuss the mutual love for Marmalade sandwiches.

The Paddington Bear twitter account recently shared this emotional callback to the skit in wake of the Queen's death.

Worldwide tributes pour in after the death of Queen Elizabeth II