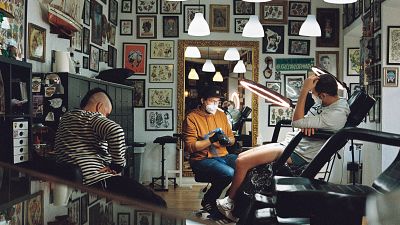 Tattoo artists have been called on to be a line of response in the fight against suicide and poor mental health.

The training - which takes 30-minutes and is open to everyone - aims to help learners read between the lines of what veterans are saying, open up conversations, and eventually guide them towards where they can be helped.

Tattooists are being targeted as they are uniquely positioned to access veterans due to the personal relationships of trust built during long hours in the chair. Anecdotally, many artists confirm that their customers often disclose feelings to them they would otherwise keep to themselves.

“A lot of the time the tattoo appointments become almost therapy and venting sessions.

“I think tattooists are perfectly placed to take this training and learn how to spot signs when someone might be struggling.”

Hope for Heroes hopes to branch from tattoo artist into other public-facing professions that build long-term customer relationships such as hairdressers and barbers.

Are veterans more likely to be suicidal?

The initiative comes from Help for Heroes as new research from the charity shows the extent to which veterans are affected by suicidal thoughts.

In a poll carried out on their behalf by YouGov, Help for Heroes found that one third of UK veterans felt suicidal.

Suicide among veterans is also of high concern across Europe and in the United States.

The training roll-out will be targeting at the beginning in UK towns and cities with large veteran populations like Plymouth, Salisbury, Colchester, Maidstone, Middlesbrough and Chesterfield.

“This initiative aims to find a way of opening the conversation with someone they trust and training them to be able to spot the signs. In doing so we may well prevent lives being lost to suicide.”