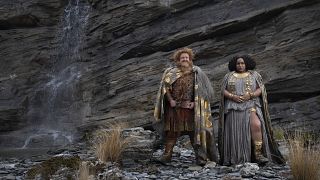 In a world as divided as ours a beloved fantasy franchise’s return to the screen after over a decade can only bring people together, right?

Since its release on Amazon Prime ‘Lord of the Rings: The Rings of Power’ has been pitted against ‘House of the Dragon’ in a battle that can see only one prequel to rule them all.

However, anyone hoping that a ratings battle of the franchises would be the main beef happening off-screen was woefully misguided and perhaps foolishly optimistic.

What is the backlash against 'The Rings of Power'?

Viewers and reviewers of 'The Rings of Power' were quick to criticise the series’ treatment of race, with the internet doing its thing as well as the resurfacing of questionable opinions from J.R.R Tolkien himself.

It turns out that the battle for Middle Earth isn't beyond the reach of the culture war being waged across actual Earth, and while Amazon have imposed a 72-hour delay on review postings to ensure bad actors can’t affect the show’s ratings, elsewhere the backlash rages.

Now in a move designed to stand by cast members who have been victims of vile abuse, Amazon have released a statement in support of their diverse stars and decision making.

“We, the cast of Rings of Power, stand together in absolute solidarity and against the relentless racism, threats, harassment, and abuse some of our castmates of colour are being subjected to on a daily basis. We refuse to ignore it or tolerate it," read the statement.

“Tolkien created a world which, by definition, is multi-cultural. A world in which free peoples from different races and cultures join together… to defeat the forces of evil”. Directly addressing POC fans of the show, the statement added, “You are valid, you are loved, and you belong. You are an integral part of the LOTR family – thanks for having our backs," it continued.

But why are some fans so mad about Lenny?

In the series, which tells the story of how the Rings of Power which set the plot of ‘Lord of the Rings’ in motion came into being, one plot thread centres on distant relatives of the hobbits of the Shire.

British comedian and actor Lenny Henry plays Sadoc Burrows, leader of the nomadic Harfoot tribe, who wandered Middle Earth millenia before Bilbo and Frodo get into any mischief.

Unfortunately some viewers were critical of the casting of Henry, who is a black man of British-Jamaican descent. Many Tolkien fans complained that Henry’s Burrows is not in-keeping with literary canon and does not match up with the all-white, Eurocentric vision of Middle Earth in the Peter Jackson trilogy.

For anyone who is thinking the outrage is ludicrous as a black hobbit is hardly less believable than, for example, a kingdom of Elves and Dwarves who all have magical rings of power, Henry agrees!

“God bless them,” Henry said of fantasy fans who complained of black characters in both ‘Rings of Power’ and ‘House of the Dragon’.

“Actually, storytellers can do what they want, because they’re storytellers. In the reimagining of these stories from 1000 years ago, they are not part of the canon that everybody knows, this is a reimagining and re-weaving of the story.”

Casting aside, it hasn't taken long for eyeballs to swivel away from TV screens and towards the original source material, and its author.

In an era where decade-old tweets can ruin a career it’s perhaps refreshing that the controversy being whipped up about Tolkien himself comes from the dead art of letter writing.

Tolkien’s world is populated by the races of Elves, Men, and Dwarves who battle against the evil and disfigured orcs.

In a private letter Tolkien described the orcs as “degraded and repulsive versions of the (to Europeans) least lovely Mongol-types,” who were “squat, broad, flat-nosed, sallow-skinned, with wide mouths and slant eyes.”

The ‘Mongol-types’ speaks for itself and many have speculated that the orcs are caricatures of non-European, colonised people and an expression of Victorian England’s anxieties about the ‘other’.

However, elsewhere Tolkien was critical of Nazi race theory prior to World War II and also criticised the treatment of black people in South Africa at a time when these opinions were not en vogue.

Whether Tolkien's original material is steeped in colonial-era stereotypes or not, the show itself has certainly got tongues wagging.

Let’s hope the backlash is just teething-problems and soon we can all enjoy an extended battle sequence in peace.

Is The Lord of the Rings: The Rings of Power worth watching?