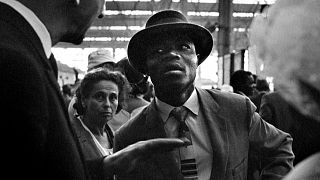 In May 1962 a 20-year-old Howard Grey travelled to Waterloo station in London, England to photograph the arrival of migrants from the Caribbean.

Around 150 people arrived at the station, greeted by friends, family and loved ones but their identities remain a mystery.

Now, the city's National Railway Museum has launched a search to identify those who arrived that day in 1962, to tell their stories in a major exhibition.

The photographer behind the lens

On the day the migrants arrived, the young Howard Grey decided to take a break from his job photographing women's corsets and headed to Waterloo Station in the hopes of capturing a historic moment.

This was the last large-scale arrival of Caribbean migrants in Britain before new legislation imposed far tighter entry restrictions.

However, Grey soon realised that the light conditions in Waterloo Station were so poor that his photographs would be underexposed and unusable.

"I started to take pictures, but I was horrified that there was not much light, and it was dark. It was a dark day, and in those days, Waterloo had a dark tarmac floor," explains Grey, whose family were also immigrants in the 1900s.

"And sure enough, there was nothing on the negatives at all".

Despite his disappointment, he did not throw the negatives away. And little did he know the photographs he took would make a miraculous recovery 50 years later.

Decades later Grey rediscovered the negatives from 1962 which he had left in an envelope.

He decided to try to restore the images using modern digital scanning techniques.

"I did three scans of the same negative and made it into one and it (the image) just popped up, like invisible ink. I was astounded. it was a Eureka moment," said Grey.

"Everything was there that I had ever imagined. And I had not seen those images. So after doing 37 of them, they were a discovery for me, because I hadn't seen the pictures. It was a miracle for me," he added.

The National Railway Museum, which owns a number of Grey's restored photos, is now launching a search for those featured in the pictures or their descendants.

It's hoped that those in the photographs or their relatives may recognise their faces and come forward so their stories can be told as part of a major exhibition by the museum planned for 2024.