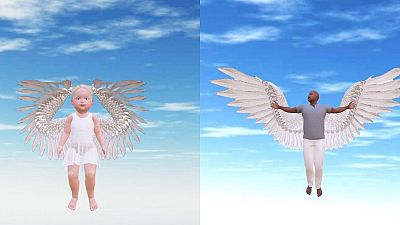 Two of the manifestations of positivity on MyAngels.com   -   Copyright  Courtesy of MyAngels.com
By Euronews  •  Updated: 18/05/2022

The digitisation of faith seems to be happening pretty late for a traditional structure universally known to have billions of followers.

Record prayer-related posts were recorded during traditional religious festivals on Facebook over the last couple of years but unique platforms that make real strides towards harnessing the worshipful are few and far between.

Moreover, there are blurred lines between religion and this thing called 'spirituality', particularly with the way many people self-identify in the 21st Century.

Once the domain of deep thinkers in ancient times, the social media age has brought spirituality into the vortex of our present.

It's mentioned in people's twitter biogs, insta intros and on dating profiles. For many, it's not so much about meditation upon the fundamental questions of existence, but rather more about telling people they've read 'The Secret' and wanting to appear to have depths they may not, in fact, possess.

But whatever the reality of each individual's definition, spirituality is ubiquitous. You will often hear people talk of energy. Of light. A force of goodness and truth. Very lofty concepts that could seem hysterical or blinkered under cynical examination, but in a fragmented world that is constantly underwritten by the often blunt court of public opinion and the murky effluence of keyboard warriors, could it be an antidote?

"It's not so much an antidote to negativity, it's more of a balance," says Sorin Marinescu. My first conversation with him took place in late December of 2021, on a zoom call. Talking to me from his native Romania, he was wearing a fetching festive jumper and sitting in front of a flashing Christmas tree. If it had an angel on its top, I couldn't see, but there was soon to be one perched on his shoulder.

In June of 2021, a press release was circulated detailing the start-up of a new social platform called MyAngels.com

An interface driven, they say, not by religion so much but rather by, you guessed it, spirituality.

Marinescu is the founding father. Driven by the quest to discover what will motivate people to do good, he came up with the concept of a platform that can only transmit positive thoughts.

Users join communities where there are one or more leaders, or 'inspirers'. In a sense, it takes something from the tribal model and offers a renaissance of the time where elders were listened to, where people sought the advice of a wise person, someone eminently trustworthy. But in order to keep the positivity flowing, there can be no advice. However, users can obviously follow the leader, as it were, on their own communications platform.

In order to eliminate all forms of negativity, trolling etc, users cannot participate in public debates or make comments in the way that you can on most other social media platforms.

Regarding language, the functions are written in English. Marinescu says his team are encouraging everyone to use the English language but there are cases when they post wishes or news in their native language. Due to the fact that more than 90% of the users are at the graduate or postgraduate level, they understand English or are conversant with translation tools.

Who is using it?

Euronews were given the details of some MyAngels users and we contacted them for comment.

"We are used to platforms where users show the superficiality of their life through photos, judgments, criticism. Verbal and visual violence is the order of the day," says Ana Ortega, a vocation and training therapist from Spain. "That's why I love this platform, it reminds me of what I really need in my daily life."

Luminita Anglade, a psychologist from France, expounded upon how world events have, as she sees it, invoked the need for this counterbalancing platform.

"The changes that have taken place in recent years and that have affected humanity in all respects but especially psychologically (economic crises, pandemic) have led to a saturation of negativity. We were lacking landmarks. We are still very connected to the outside world and in need of recognition, validation and safety. Social platforms are polluted and seem to encourage more and more negativity." she tells Euronews.

But could this eternal positivity inevitably lead to dissatisfaction?

After all, Marinescu tells Euronews that it's mostly university-educated, above-average-waged people that use this platform. Could lack of nuance be its downfall before it has begun? Intellectual powers of expression may be frustrated, stunted, and linear sentiment could in time seem disingenuous.

Is there a psychological need for further validation, or more specific info on the well wishes that renders an initial, nuance-free, good wish ineffectual?

I ask Luminita to enlighten me.

"Even if we assume that someone with a negative intention would come on MyAngels he/she will not have effective power. The lack of support from the other users, in this case, would lead shortly to his/her positive behavioral changes."

So it's a comfort blanket?

"In these times, where we feel so alone, you feel more accompanied when others hold and support you with a candle or good thoughts," Ortega responds. "It is the moment to remember that together we are stronger to be able to manifest the positive in our life."

More gimmicky perhaps, or indeed more comforting, is the guardian angel that inspires the name of the platform. With some fairly basic augmented reality software, you can carry your angel (or if your religion eschews the traditional angelic form you can simply have the icon of an effulgent guiding light) with you throughout your day. Much like dog ears on Snap, you can use the MyAngels app and your camera function to see your angel next to you as you see your image staring back at you. Sorin demonstrates this and I ask him to move so it's on his shoulder. He does, and it's cute and slightly funny. But it does illustrate how he sees his creation. As a balancing power in the face of a confederacy of devils fighting for space on the other shoulder.

While religion's power, certainly in the US, is lessening - a 2021 Pew Research Center study found that almost 30 per cent of U.S. adults are now religiously unaffiliated - feeling good, safe or supported is still running at a premium.

"I use it daily and I confess that the results are visible in the sense that I am more positive in relation to the situations I face," Luminita adds.

For Dr. Dragos Argresanu, a spiritual mentor from Romania and a MyAngels’ influencer, MyAngels is about people who, through the power of the whole community, will fulfill, their own personal dreams: “I understood how important energy is! The ‘desire’, the power, the energy you put into fulfilling a wish is huge. And, more spectacularly, the more people want something directed towards the good of all, the more likely it is to be fulfilled. I saw that when you unite together behind a common goal, you open doors that cannot be opened by one person.”

How is it monetised?

Marinescu doesn't have the answers yet. The whole enterprise is still very much in start-up mode.

"We are continuously looking for investors because this is the business model. At this stage we are attracting more and more users which means we need resources," he says.

Such funding capitalists are usually called 'angels' and I see no reason for that to change in this context.

They have experimented with an Israeli fashion brand to see if users earning credits to visit the cyberstore will promote revenue, but the jury is out for now. It seems they are open to ideas.

The founder spent most of April 2022 in the United States where he says the company is entering a new phase.

New recruit Dr. Darren Weissman is now on MyAngels. He is a known figure in spirituality around the globe - and is likely to help bring in a potentially sizeable US audience.

"The MyAngels platform brings hope and light, love and compassion into our hearts and minds and as a result, empowers us to begin to change our lives. Life is scary, yet there is meaning in fear. Life is painful, yet there’s value in pain. Life is challenging, yet every challenge is an opportunity," Weissman adds.

I ask him what his favourite part of the platform is.

"There is a space on the app to “Make a Wish”. This gives people the opportunity to acknowledge the pain, fear and stress in their lives and then focus with their hearts what they desire to create and manifest. The beauty with making a wish is you will feel the support of people from all around the world. You will receive their energy and prayers, light and blessings. This is for everyone as we are all interconnected through love."

"The American perspective is quite different from the European one," says Marinescu. "Now I can say that MyAngels has a complete, global perspective."

Diplomacy has been 'weaponized' with memes, trolling, online polls