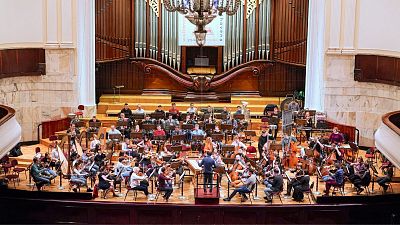 The Kyiv Symphony Orchestra are preparing to embark on their European tour, performing for the first time since Russia's invasion of Ukraine   -   Copyright  AFP   -
By Euronews with AFP  •  Updated: 21/04/2022

Ahead of their first concert since the start of Russia's invasion, members of the Kyiv Symphony Orchestra voice hope that their music will help heal troubled souls and boost Ukrainian culture.

Some of the orchestra's musicians fled the country to the sound of Russian bombs, others remained in Ukraine but had to leave their homes and have been playing only to their families or in bomb shelters.

The concert at the Warsaw Philharmonic on Thursday will start a European tour for the orchestra.

"Our concerts are truly a cultural mission," Oleksii Pshenychnikov, a 22-year-old second violin in the orchestra, told AFP during a break in the rehearsals.

"In Ukraine, we say there is a 'cultural front', meaning it is not escaping from the war, it is another aspect of the war," Pshenychnikov said.

The men in the orchestra have been granted special dispensation from Ukrainian authorities to leave the country as martial law is in place in Ukraine and fighting-age men are not normally allowed to leave.

Gaggero, who had himself been due to travel to Ukraine on the day the conflict began, said the process of rehearsing together had been invigorating for musicians forced to spend long weeks apart.

Several of the musicians are travelling with their whole families and loved ones left behind are on everyone's minds as the conflict intensifies in southern and eastern parts of the country.

The rehearsals are accompanied by therapy sessions.

Participants were sceptical about the idea at first, but organisers said more and more are taking part.

"Music, particularly being able to practise my violin, has helped me to get away from the terrible reality," said Elizaveta Zaitseva, 25.

"Now I can live again in my own world, the one I am used to, the world of music," said Zaitseva, who studies in Nuremberg in Germany.

Thursday's concert will include the works of Ukrainian composers Maxim Berezovsky, Myroslav Skoryk and Boris Lyatoshynsky as well as a piece by Polish composer Henryk Wieniawski.

"It is unfortunate because of the war but our culture has a big opportunity to make lesser-known composers known in the West," Zaitseva said.

"Europe will become much richer if it discovers the richness of Ukrainian culture."

Speaking at the Warsaw Philharmonic, where the walls are decorated with stark images of the ruins of post-war Warsaw, Zaitseva said she hoped that the music she plays could "access people's souls".

"Through music and art we are speaking to the soul, we are transmitting our pain and our wishes, our hopes into people's hearts through music," she said.