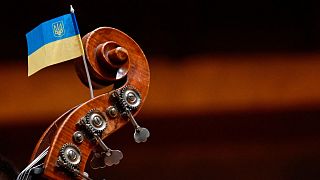 For the first time since the start of the war in Ukraine, the Kyiv Symphony Orchestra has performed at the Philharmonie de Paris, in support of Ukrainian artists.

It marks another stage of the orchestra's European tour, which begun at the Warsaw Philharmonic in April this year.

The major concert began with a prelude of five singers from the Kyiv National Academic Operetta Theater, who performed several popular Ukrainian songs.

The general director of the Kyiv Symphony Orchestra, Anna Stavychenko, said that playing original Ukrainian music was an important part of the "orchestra's identity".

"We wanted to show of course some Ukrainian repertoire because it was our strategy, before the war started, we also played a lot of contemporary Ukrainian contemporary music," Stavychenko said.

For many of the musicians of Kyiv's Symphony Orchestra, the tour is a way to transmit their own personal pain from the war and also contribute to the Ukrainian "cultural front".

"I can't just sit and be silent and do my job whatever it is. I need to speak to people. I need to speak to them with music or with words. But I need to spread this message about Ukraine, about what is going on there," explained Oleksii Pshenychnikov, a violinist of the Kyiv Symphony Orchestra.

The men in the orchestra have been granted special dispensation from Ukrainian authorities to leave the country, as martial law is in place in Ukraine and fighting-age men are not normally allowed to leave. The exemption only lasts until the end of the tour and its Italian conductor Luigi Gaggero said he hoped other venues will come forward to offer to host the orchestra "maybe until the end of the war".

Flutist Olha Stuykalova says at first she struggled with feelings of guilt when she left the country to perform, but is now realising that she is putting her musical talent to good use.

"The best I can do is to send a message by performing music, by articulating in a cultural way. And now I'm trying to reprogram myself and my thoughts that everybody's doing something in the favour of Ukraine," she told AFP.

Check out the video above to see the Kyiv Symphony Orchestra performing in Paris.