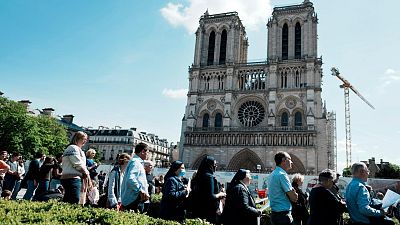 A lead sarcophagus recently discovered in the cathedral of Notre-Dame in Paris will soon be opened at the forensic institute in the French city of Toulouse, where experts hope it will give up its secret.

The sarcophagus, which probably dates from the 14th century, was unearthed in March during archaeological excavations prior to reconstruction work on the cathedral spire, which was partially destroyed by the fire in April 2019.

Buried more than a metre underground, in the western part of the transept crossing, the sarcophagus was in a good state of preservation.

An endoscopic camera allowed archaeologists to take a first glimpse inside without opening it, and they were able to see the upper part of a skeleton, remains of plants under the head, possibly hair, textiles and an object which has not yet been identified.

The sarcophagus was removed from the cathedral on Tuesday and has been put in a secure location until it can be examined further in Toulouse, according to France's National Institute for Preventive Archaeological Research (Inrap).

Forensic doctors and scientists will open the sarcophagus to study the bones of the deceased and other objects, in order to identify the sex and state of health, and try to narrow down a more precise date by using carbon dating technology.

"The sarcophagus is located under fill containing furniture from the 14th century... if it turns out to be a sarcophagus from the Middle Ages, we are dealing with an extremely rare burial practice," said Christophe Besnier, the scientific director of the site.

The studies could also provide information on the rank of the deceased, who was thought to belong to an ecclesiastical or secular elite.

But "a human body is not an archaeological object," said Dominique Garcia from Inrap. "As a human remains, it is the civil code that applies and archaeologists will study it as such."

The team from the Forensic Institute of Toulouse has already studied the burial of Louise de Quengo, a Breton noblewoman who died in 1656, and whose remarkably well-preserved remains were found during excavations at the Jacobin Convent in Rennes, Garcia said.

Notre Dame cathedral: Spire to be rebuilt exactly as it was