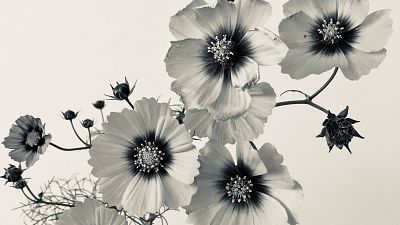 The Royal Horticultural Society (RHS), which describes itself as “the world’s leading gardening charity”, has always combined an interest in gardens with a keen eye for botanical art. Dating back to the RHS’s foundation in 1804, the organisation’s library collections include 30,000 artworks and around 250,000 photographs. Holding pieces from the early 17th century all the way through to contemporary art, the RHS continues to be a prominent champion of botanical artists working today.

Returning to London’s Saatchi Gallery for a second year, the 2022 RHS Botanical Art and Photography Show brings together a spectrum of international botanical art, with artists represented from countries including the USA, Romania, South Korea and Japan, as well as many from the UK. Taking over a large section of the sprawling gallery’s ground floor, the exhibition is split into separate displays for sections on botanical art (consisting of painting and illustration) and photography.

Having originally submitted their work for entry, before then going through a rigorous pre-selection process, the majority of the artists have a portfolio of six pieces on display, for which they have been awarded either a Gold, Silver Gilt, Silver or Bronze RHS Medal. The RHS has also announced four additional awards, for Best Botanical Art Exhibit, Best Botanical Artwork, Best Photography Exhibit and a Judges’ Special Award.

For most audiences, however, the key takeaway is that the show is intended to represent some of the best botanical art currently being produced and that, for all the artistry and beautiful workmanship on display, it is the plants that remain the focal point.

Echoing a number of other exhibitors, Mitsuko Kurashina, who was awarded a Gold Medal as well as the Judges’ Special Award, suggested that the plants she had painted were the real winners. That being said, Kurashina’s work is also emblematic of the dedication she and many of her colleagues show to their artwork.

Depicting vegetation that has grown in the wake of the 2011 Tōhoku earthquake and tsunami, and completed over a number of years, Kurashina’s series is an intimate portrayal of new life at the water’s edge. Somewhat unusual compared to most of the work on show, in that they reveal elements of the landscape or ground where the plants are growing, the watercolours combine accuracy with a delicate, enchanting aesthetic that attracts and soothes the onlooker.

Given, however, that when Kurashina first visited the Tōhoku region to begin her research it was still in a post-disaster state, with bodies still being recovered and radiation from the Fukushima nuclear disaster an ongoing danger, there remains a tension in the background.

Like Kurashina, another exhibitor who shows considerable dedication to her craft is fellow-Japanese artist Yoko Harada.

For her series depicting different variations of the Arisaema genus, Harada collected some specimens on a mountainside owned by a friend in southern Japan, traversing the difficult terrain to seek out the plants she wanted. Carefully digging them up, Harada took the specimens, along with others collected in the Kanto region, back to her studio in Tokyo to observe them closely over a period of months.

A worthy winner of the Best Botanical Artwork award, Harada’s work looks as you would expect botanical illustration to appear, in its careful depiction of the attributes and appearance of a specific plant, but does so in a way that makes it stand out. Partly this is the scale of the work in the white gallery setting, the balance of the six pieces in the portfolio and the considered composition of each piece, but also the sheer quality of how the work has been executed.

The RHS considers scientific accuracy to be a key criterion for all of the botanical work on display, placing importance on the ability of the artwork to act as a record for specific plants and species. It’s a point succinctly made by artist Georgia Danvers when she describes her own work:

“It’s bringing science and art together.”

For her series shown in the RHS exhibition, Danvers worked with Professor David Twell at the University of Leicester’s Department of Genetics and Genome Biology to access images of pollen grains captured with a high definition, scanning electron microscope.

While those original images were in black and white, however, Danvers has added colour to her pieces, giving the microscopic a quality that perhaps makes it appear more lifelike to our eyes. At the same time, the resulting images also have an alien quality that makes them intriguing and aesthetically interesting to look at.

The opportunity for entry to the photography section was broader than that for the more specialised botanical art field, with both children and adults free to enter. That openness is carried through to the exhibition, which includes professionals who specialise in botanical photography, alongside photographers whose work has not previously been seen in a physical exhibition.

Among the latter is Iowa-based Sanjay Dinker Jani. An architect by trade, Jani has previous experience in photography, but only began focusing on plants and flowers in the last couple of years, pushed by the arrival of COVID-19 to look for subjects he could shoot from his immediate environment.

Allowed by the RHS to exhibit seven images, Jani’s series represents the colours of the rainbow, with each individual plant strikingly lit against a black background.

Another photographer exhibiting in a physical exhibition for the first time is Joseph Shaffery, who lives near the Essex coast in England.

Shaffery’s images of woodland scenes from around the world include two he captured in Australia in early 2020, just before COVID-19 lockdowns were announced. While Shaffery says he often captures macro, close-up photographs, the work here shows a broader view of trees in their natural setting - “a celebration of the beauty of the forest.”

As is the case with the images by Jani and Shaffery, the majority of the seventeen photographic portfolios on show are in colour. In that context, the monochrome series by US-based Libby Ellis (see main image above) brings a contemplative contrast. Bringing to mind the imagery of 19th-century photography and early black and white cinema, Ellis’s work has an ethereal, luminous quality.

Depicting Cosmos flowers picked in her own garden and those of friends where she lives on Martha’s Vineyard, Ellis says: “what’s important to me is my relationship to the flowers.”

The RHS presentation is complemented by a display organised by Saatchi Gallery of work by contemporary artist Anthony James. Adding, as it does, a futuristic twist, visitors should leave with new ways to appreciate and visualise the planet’s plant life.

Stifling or an unlikely creative inspiration? Art after lockdown