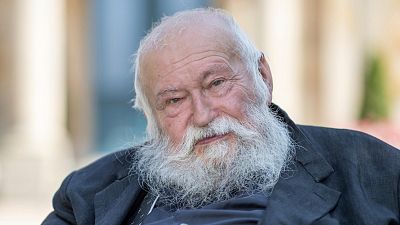 Hermann Nitsch, an Austrian avant-garde artist known -- among other things -- for works in which he used blood and animal entrails, has died. He was 83.

Nitsch's wife, Rita Nitsch, told the Austria Press Agency on Tuesday that he died at a hospital in the Austrian town of Mistelbach on Monday after a serious illness.

Nitsch, born in Vienna in 1938 was a versatile artist, working across different mediums, with performance art, painting, sculpting and composing among his activities.

At its peak, Nitsch's “6-day Play” in 1998 featured 13,000 liters of wine, hundreds of liters of blood, kilograms of grapes and tomatoes, several animal carcasses and musical accompaniment.

His works and performances drew plenty of criticism. After protests against one of his exhibitions, Nitsch said in 2015 that “the meat I use is not eaten but used for a theater performance, a higher purpose.”

He told a German interviewer before his 80th birthday that “overcoming the revulsion barrier is a task of art.”

There are museums dedicated to Nitsch's work in Mistelbach in northeastern Austria and in Naples, Italy.

“Austria is mourning a fascinating painter and an impressive person,” he said. “His work will live on; I am certain of that.”