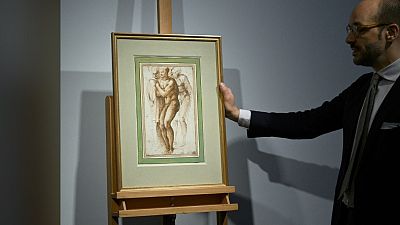 A drawing thought to be Michelangelo's first nude was unveiled on Thursday in Paris ahead of its auction on May 18.

The unpublished sketch dates back to the end of the 15th century and, auction house Christie's has said, managed to "escape the attention of specialists".

Fewer than ten drawings by Michelangelo exist in private hands. This one, in pen and brown ink, was last put up for sale in 1907 at the Hôtel Drouot under the classification "Ecole de Michel-Ange".

It was not until 2019 during an inventory for a French private collection that scholars finally attributed it to the master himself, who died in 1564.

That September it was declared a 'national treasure of France', prohibiting its exit from French territory for 30 months, and giving the French government and museums the opportunity to buy it back.

No offer was made during this period. In the coming weeks the drawing will be exhibited in Hong Kong and New York to drum up interest before returning to Paris on May 13 ahead of the auction.

Remarkably well-conserved according to experts, the sketch is the size of an A4 sheet and may be inspired by a fresco by the painter Masaccio, 'The Baptism of the Neophytes' (1426-27).