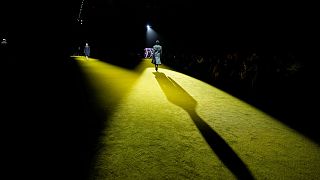 Milan Fashion Week goes ahead despite Russia's invasion of Ukraine, meanwhile concerns are raised over sanctions by the West   -   Copyright  Luca Bruno/AP Photo
By Tim Gallagher  with AP  •  Updated: 25/02/2022

Milan Fashion Week continued into its second day under the shadow of the Russian invasion of Ukraine, and as Prada, Armani and Moschino took to the catwalk talk turned to possible economic repercussions for the industry from Western sanctions.

While heads of EU states disagreed over whether Russia should be banned from the SWIFT payments system, the heads of fashion houses expressed their own concerns as the buying power of the Russian elite was on the negotiating table.

The head of the Italian fashion council said more than €1 billion worth of luxury exports to Russia could be at risk, even as Russian buyers return to Milan for the first time since the pandemic thanks to a deal brokered with the government to recognise the Sputnik V vaccine for business travellers.

"It is high risk, of course, but what is worrying us is the risk of the war,” says Carlo Capasa, president of the Italian National Fashion Chamber.

“It is the human side of this, because whatever could be the risk of the industry, we are talking about 1 billion Euros turnover a year…but it is not at the centre of our worry today.

“The centre of our worry is the death of so many people, the life of the people, the health of the people. We are coming out of two years of pandemic and we don't need a war so we wish that we find another solution."

“It is not even the moment to think about the economic damage, but instead the damage that man does to himself."

Even if the runways didn't reflect it, the invasion was running in the background as the fashion world put on its first show in Milan for two years.

Milan Fashion Week is once again happening at the time of significant global events; it was exactly two years ago during the February fashion week previews that the first case in the West of locally transmitted COVID-19 was detected near Milan.