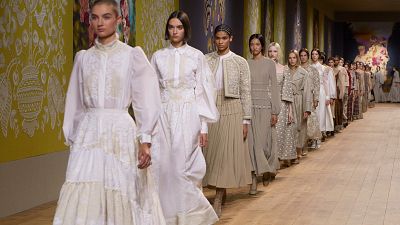 Haute Couture Autumn Winter 2022-23 is the first Paris Fashion Week to include the public since the pandemic started, where all 29 official brands are displaying their wares on the runways.

For a long time, it seemes as if traditional fashion shows would never be in the same spotlight, but after two years things are picking up again and going maskless too.

French house Schiaparelli started off the week with an early morning show at the Musée des Arts Décoratifs in Paris' 2nd arrondissement. It was an ode to founder Elsa Schiaparelli, whose creations pushed boundaries. Creative Director Daniel Roseberry strived to bring together those who adored Ms Schiaparelli from Christian Lacroix, Jean Paul Gaultier, Yves Saint Laurent, and Azzedine Alaïa.

"In recent years, though, it's felt like fashion has tried its hardest to prove it actually isn't silly,”

“All of us who work in fashion know that much of the rest of the world thinks that what we do is silly. It's a boring criticism,” Roseberry opens up in house notes. “In recent years, though, it's felt like fashion has tried its hardest to prove it actually isn't silly,” as he explains the more serious feats of the world. “I always talk about trying to achieve that state of creative innocence—of fighting to stay close to that person who fell in love with fashion and its possibilities, of not succumbing to cynicism or world-weariness. I hope that spirit comes through in this collection: I hope people who see it can tell what fun the team and I had making it. I hope the joy we felt, of creating things, of getting to make beautiful objects that people will always remember, is evident in every coat, dress, and accessory.”

Another show that shined brightly was the house of Dior’s AW22-23 Haute Couture collection by creative director Maria Grazia Chiuri at Musée Rodin on Monday under the searing Parisian sun. Sitting front row were actresses Sigourney Weaver, a Dior fixture, and Naomi Watts. The starting point for the collection was life, or rather the tree of life envisioned by Ukrainian artist Olesia Trofymenko. On many of the pieces done on cotton, wool crepe, silk, and cashmere in the collection are embroidered branches, the trunk of a tree, and roots - all parts that give and represent life. Cotton, silk and yarn threads helped provide intricate details. A strong nude colour palette threatened to dominate the collection, yet it was spunctuated by black and blue embroidery.

A collection not for the ballroom, it evoked strength and femininity in everyday looks. Silk chiffon gave air and flow to dresses, and Christian Dior’s iconic Bar jacket was reimagined in smock fabric, while the matching skirt was structured by ribbon that forms a basque, or jacket done in a fitted bodice. Chiuri garnered these strong looks with techniques of patchwork braiding, with bronze and black lace and guipure. This collection is about getting back to the heart of haute couture craftsmanship, not intending to be about sparkly glamour.

A decade of decadent design

Giambattista Valli created a bold collection, one of his strongest was in the heart of the city’s jewelery district, Place Vendôme. Volume in the skirting, tulle, bows, and color occupied the collection as the Italian designer celebrated 10 years on the Fédération de la Haute Couture et de la Mode’s official brands that show. As models descended onto the runway from behind a wall of silver and colorful balloons, lots of what seemed like never-ending tulle followed them.

“It’s like the generosity of the hug. It’s a hug of flowers, a hug of feathers, a hug of tulle. There are all these bouquets that hug you; it’s this kind of pleasure to share happy times together,” Valli told Reuters. Not wanting to think too much about the past few years, it’s clear he wanted to go big and celebrate fashion while celebrating life.

French designer Julien Fournié presented his AW22 Haute Couture collection on Tuesday next to the River Seine. Quintessentially, Fournié described it best as his looks have a bold edginess to them, many with a hint of the 1940s. Sequined pants were paired with an intricately tailored jacqard, a blue sequined cat suit was combined with a sheer Red Riding Hood-esque covering underneath, and a pink and gold gown with horn-like fabric protruding just under the shoulder blades. While the typically Couture show wedding gown had Marie-Antoinette inspired Rococo fashion with touches of the pannier skirts, off the shoulder, with two sashes gliding down the bodice for the train. Truly unique and captivating.

One brand returning to the Haute Couture Week runway is Syrian designer Rami Al Ali. He is not on the official calendar but creates one-of-a-kind pieces that awe during every Haute Couture week; Indian designer Rahul Mishra, who hasn’t shown a collection since 2020; Georgia's Demna Gvasalia, who will show his second ever collection for Balenciaga; and Balmain’s Olivier Rousteing is guest designing during the Jean Paul Gaultier show this week, a collection that’s being talked about as one of the hottest must-see tickets in town. Gaultier’s spring 2020 Couture collection was his last. Since then he has taken on a guest designer to create his Couture collections, and this will be Rousteing’s first time designing anything Haute Couture.