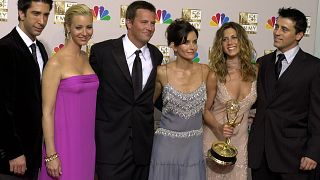 The long-awaited return of the cult 1990s series to Chinese streaming sites on Friday was disrupted when fans noticed that any reference to the homosexuality of one of the female characters had disappeared.

On the Weibo social network, China's Twitter equivalent, the hashtag #FriendsCensored has been viewed tens of millions of times.

Under the spotlight are the changes made to the second episode of the first season, as broadcast by the Bilibili, Tencent, iQiyi and Youku platforms.

"I discovered that all the dialogues mentioning the homosexuality of Carol, the ex-wife of Ross, had been cut. The cuts are obvious", wrote a user whose message attracted more than 177,000 likes.

The communist power has increased, in recent years, its censorship of "sensitive" themes such as sexuality, violence or politics, particularly within imported works. A position that does not fail to arouse the irony of some Internet users.

"Why talk about homosexuality? There is no such thing here, where eternal perfection reigns. Everyone is happy under this government," quipped another Weibo user.

These criticisms were in turn deleted from the social network and the subversive hashtag was replaced on Sunday with another: #WhyisFriendssopopular?

The series, broadcast from 1994 to 2004 in the United States, is very well known in China, where millions of people have watched it on DVD. Many young Chinese say they learned English with the help of "Friends", which had already been streamed by Sohu between 2012 and 2013, without being censored.

It was unclear whether the changes to the "Friends" episodes were enforced by the authorities.

In 2019, several scenes from "Bohemian Rhapsody" referring to the sexuality of Freddie Mercury, the singer of the rock band Queen, were also erased from the version broadcast in China.

More recently, David Fincher's cult film "Fight Club", aroused the amazement of moviegoers, for a truncated ending that warped the original message of the film. After an outcry, the film's ending was finally reinstated.

Some producers sometimes take it upon themselves to cut scenes from films or series in the hope of obtaining authorisation for the Chinese market.