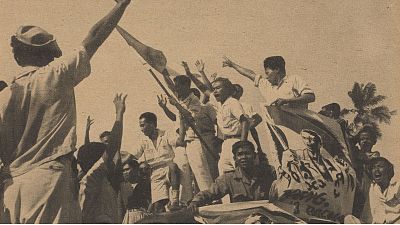 The exhibition will explore the Indonesian war of independence and confront the horrors of Dutch colonialism   -   Copyright  Rjiksmuseum
By Tim Gallagher  with AP  •  Updated: 10/02/2022

Displays will cast into sharp relief the suffering of the Netherlands' colonial subjects in an exhibition entitled "Revolusi! Indonesia Independent," in Rijksmuseum, Amsterdam.

A video of Dutch troops overseeing the torching of houses in an Indonesian village plays in one room, while a few metres away, a baby's clothes sewn from book covers — the only scraps of cloth the mother could find — are laid out.

This is just one example of exhibits curated to show the violent birth of the island nation from the ashes of World War II and three centuries of colonial rule.

Indonesia's War of Independence is shown through the eyes of 23 witnesses, ranging from a young Indonesian boy with a box of watercolours covertly painting troop movements in his hometown to famed photographer Henri Cartier-Bresson's iconic images of President Sukarno being sworn into office at the sultan's palace in Yogyakarta on Dec. 17, 1949.

The exhibit includes paintings, propaganda, video and photographs of the tumultuous transformation of the Dutch East Indies into Indonesia.

The show is part of the Rijksmuseum's examination of the Netherlands' colonial past that last year featured a major exhibition on the country's role in the global slave trade.

"If you look at the Dutch educational system, Indonesian independence is described from a Dutch perspective, and we feel it very important to continuously broaden our history," says museum director Taco Dibbits.

Linguistic controversy in the colonial exhibition

The exhibition, which will travel to Indonesia next year, was pulled together by two Dutch and two Indonesian curators.

One of the Indonesian curators, historian Bonnie Triyana, sparked controversy last month when he criticised the use of the word "bersiap" in the exhibition.

"If we use the term 'bersiap' in general to refer to violence against the Dutch during the revolution, it takes on a strongly racist connotation," he wrote in Dutch newspaper NRC Handelsblad.

The word, meaning "be ready," is often used in the Netherlands to refer to violence by Indonesians in the early days of the independence struggle immediately after the end of World War II.

One group has filed a complaint with police and prosecutors over the use of the term, saying the museum "knowingly continues to use a term that stigmatises Indonesians in a colonial way."

"What I want to do is (give) the contextual explanation into it. To make the people understand what this term means, at least from my perspective, as an Indonesian historian."

Dibbits understands the controversy about a term that is used to describe one part of the suffering unleashed by the conflict.

Indonesia proclaimed independence on Aug. 17, 1945, declaring an end to Japan's World War II dominance as well as 350 years of Dutch colonial rule. But the Netherlands fought fiercely to maintain control for four years before recognising Indonesia's independence in 1949.

Dutch leaders have addressed widespread reports of the actions of Dutch troops during the independence war; during a state visit to Indonesia in 2020, King Willem-Alexander apologised for "the excessive violence on the part of the Dutch" during the struggle.

A major research project into the violence is due to present its findings later this month;

Remco Raben, a history professor at the University of Amsterdam, said the exhibition is groundbreaking in its approach.

Learn about the most crucial UK archaeological discovery in 100 years

Primark and Greggs? Here are some of the weirdest brand collaborations