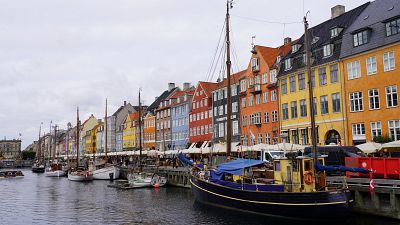 In early October, organisers of The World's 50 Best Restaurants confirmed what many in gastronomy had known for years - there’s no beating the Vikings.

By naming Copenhagen’s Noma and Geranium as no. 1 and no. 2, respectively, judges crowned the Danish capital a global centre of fine dining.

“I'm a human being and we all need this hug or shoulder clap. That's a big one, that's a big gastronomic hug that we got there and that's amazing.”

Sat on the eighth floor of Denmark’s 38,000-seater national football stadium, it’s not Geranium’s pitchside views that influence meticulous chef Kofoed’s delicate dishes - described as “art on a plate” - but the panoramic view of a Copenhagen park from its main dining room, its leaves changing colour with each passing season. And beyond that, the ocean.

“Copenhagen is a little city, and Denmark is just a little dot on the world map, so it's amazing that our gastronomy can shine beyond the country,” he said.

“We don't have a strong culinary history like France, Italy and Spain, so I think we can also be a little more free in our approach to cooking. If you change the pizza in Italy, if you change the topping, you can get a big fine, maybe go to jail,” he laughed. “It's not going to happen in Denmark, I think we are more relaxed and open to create something new.”

Loosely grouped under the term “New Nordic” and focusing on Scandinavia’s seasonal larder, foraging and fermenting, Copenhagen’s restaurants have been in the ascendancy since 2003, when René Redzepi’s world-beating Noma first opened and began smashing accolades like an establishment possessed.

“Back then, there wasn't really any culinary identity when it came to fine dining,” food and wine critic Rasmus Palsgard tells Euronews.“Of course, we had our everyday dishes and so on, but nobody really thought of Danish cuisine as something that could be served in a fine dining restaurant.”

While Redzepi racked up four World’s Best Restaurant titles in five years, it was Kofoed’s Geranium that became the first Danish restaurant to be awarded three Michelin Stars.

“I would say it's a freedom to do what you want to and not being bound by history,” Kofoed says. “We can change the culinary history, and we are changing it.”

That freedom and creativity has since spread to a younger generation of chefs, free from the pressures of convention and tradition.

Far from Geranium, past Noma’s new location by hippie oasis Christiania, sits Alchemist, a dreamy wonderland of a restaurant, where 30-year-old head chef and co-owner Rasmus Munk serves a menu of fifty “impressions”, forty of them edible.

“New Nordic has been a thing that's been with me since I started cooking,” said Munk, standing in the restaurant’s main dining room, turtles and jellyfish projected on a planetarium-like dome above his head.

“I was aged 15, walked into the culinary school and began training as a chef and it was at that point when Noma and the whole New Nordic cuisine was full going. For me, it's been natural.”

you’re sucking a dessert out of a cow's udder... and there's a hanging pigeon in front of you

While Geranium’s Kofoed can be compared to a detail-obsessed artist, Munk is more a spellbinding conjuror.

During a recent visit, chefs in Alchemist’s development kitchen were working on a dish that would change shape before guests’ eyes.

“Most believed that we will never get anything with this restaurant,” he says. “Because you’re sucking a dessert out of a cow's udder, you're dancing with a dancer, you're licking on a tongue and there's a hanging pigeon in front of you, it's not that conservative.”

Located in a former industrial harbour area, Alchemist is situated in a warehouse once used by The Royal Danish Theatre to build and store backdrops. Now, that choreographed theatre is being served on plates.

“You use food as a communication tool to change the world that we're living in. And that was the idea behind the concept,” said Munk. “To take diners on a trip that is very immersive.”

Many of Munk’s “impressions” are political and explore social issues, the aforementioned dome features plastic waste floating among its sea life - a discarded face mask a new addition in 2020.

“For me, this is about storytelling,” said Munk. “Putting focus on child labour, or plastic in the oceans, or caged chickens.”

Of course, all things come to an end, trends come and go. But Geranium’s Kofoed isn’t too worried.

“For me, staying at Geranium and working at Geranium is not really work, it's a way to choose to live my life,” he said. “Being here with the team, shoulder-to-shoulder in the open kitchen, to lead them, to inspire them, to create magical energy between us and the guests. That's all that I can ask for.”