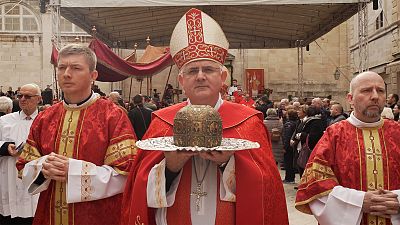 Dubrovnik combines some of the very best elements of the Dalmatian Coast: cobblestone streets, majestic buildings and the epic walls that protected the Pearl of the Adriatic for years.

But it was not only its ramparts that protected her, so did St Blaise.

“There are close to 30 status of Saint Blaise flanking and marking all the most important public buildings that mean symbolical protection," says Marina Krističević, a tour guide in the city.

"The legend says that in the 10th Century he appeared in a dream of a local priest to warn him about the enemy’s ships that were getting to Dubrovnik with intention of attacking."

"The priest took the warning seriously and alarmed everybody in the local Government, they prepared the defence and the city was saved thanks to Saint Blaise so this is when he was adopted as our patron."

At the feast of St. Blaise on the 3rd of February, Dubrovnik celebrates its patron saint, who has been commemorated for more than a millennium.

The festivities, that are the most popular in the beautiful Mediterranean enclave, date back to year 972.

The symbol of the Saint united institutions and citizens of the then Republic of Ragusa.

Today people from all corners of the Dubrovnik region gather to honour him.

"10 years ago this festivity was inscribed in the UNESCO Intangible Cultural Heritage list, this is another testimony of the value it has for the city, for the country but also for humanity," says Minister of Culture, Croatia, Nina Obuljen Koržinek.

"It is really a cultural festivity and it really strengthens the identity of citizens of Dubrovnik."

After a solemn mass, the procession carries the relics of the patron saint around the old city.

It's a day that Ragusians, like Nikoleta Borković, live with emotion.

“We are getting up early in the morning, we all wear our “vodrup” (regional costume) and we come here at the mass, this is a very special day for us.”

The festivities take place around the church dedicated to the Saint, who is also the Patron Saint of throat patients. Historian, Katarina Komaić explains the legend behind the Blessing of Throats on the Feast of Saint Blaise:

“One of the miracles that he performed was to heal a little boy that was chocking with a fishbone, he performed a miracle involving candles and the boy was saved”

As is the custom, the parish priests bless the throats of the faithful with traditional crossed candles.

The city-state of Ragusa managed to survive the threats from East and West for decades and is why the so-called "trombunjeri" are in charge of opening and closing the feast.

"This is also to show the strength of the military power because at those times it was important to show off that you had some guns and some of the biggest arms in the area in 15th Century were here, they were produced in the city," says trombunjeri, Krešimir Macan.

The gunpowder shooting ends the official celebrations but in the streets the festivities continue.