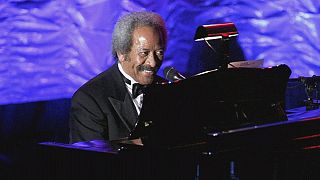 <p>Allen Toussaint, one of the giants of New Orleans music, has died after suffering a heart attack. The 77-year-old songwriter collapsed backstage after a concert in Spain. </p> <p>Starting in the early 1960’s, <a href="http://www.telegraph.co.uk/news/obituaries/11991504/Allen-Toussaint-songwriter-obituary.html">Toussaint wrote hits for some of the biggest names</a> including Lee Dorsey and Otis Redding. His songs have been covered by everyone from The Rolling Stones to Paul McCartney.</p> <p>In 1998, his name was added to the Rock and Roll Hall of Fame. </p> <p>Born in a working-class district of New Orleans in 1938, Allen Toussaint taught himself to play the piano, soaking up the boogie-woogie rhythms of the time. At the age of 13, he dropped out of school and joined his first band. He was later hired as a session pianist by Dave Bartholomew, musical director for Fats Domino. </p> <p>Fairly soon he moved into production, where he learned the deceptively difficult trick of creating <a href="http://www.charlotteobserver.com/entertainment/music-news-reviews/article44227503.html">music that wasn’t tied to a single sound</a>. Alongside his successful solo career he teamed up with all-female singing group Labelle, producing their highly acclaimed 1975 album Nightbirds. </p> <p>While he was pure New Orleans, Toussaint used the whole musical field: one of his compositions, ‘Here Come the Girls’, recorded in 1970, formed the basis of the Sugababes’ 2008 hit ‘Girls’.</p> <p>Toussaint is survived by two children and several grandchildren. </p> <p>http://www.npr.org/player/v2/mediaPlayer.html?action=1&t=1&islist=false&id=455620877&m=455679529</p>