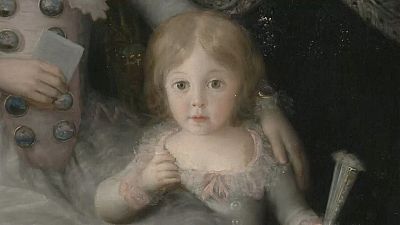 <p>A <a href="http://www.theguardian.com/artanddesign/2015/oct/06/goya-portraits-national-gallery-review">rare exhibition of portraits by Francisco Goya</a>-, including some works hardly ever seen outside of Spain, is on show at London’s National Gallery. </p> <p>Considered <a href="http://www.telegraph.co.uk/art/what-to-see/goyas-portraits-national-gallery-review/">one of the greatest portrait painters of all time</a>-, Goya depicted everything from royalty to major historical events or even his personal nightmares. His technique influenced generations of artists, including Manet and Picasso.</p> <p>Organised in chronological order, the exhibition traces his career from his early beginnings at the court in Madrid to his final years in France.</p> <p>“What’s been really wonderful is to see how actually the portraits shed a lot of light on the artist himself, who he knew, who he loved, who he hated, who he admired, so there’s a lot of fantastic insights into the artist’s life,” says the show’s curator Xavier Bray. “And one could say that not only do you feel that you are conversing with these people, but you get to know them from a sort of character, almost psychological point of view.”</p> <p>The 1797 portrait of the Duchess of Alba is one of the the highlights of the show.</p> <p>After her husband’s death, she retreated from public life to her residence in southern Spain, where Goya joined her, sparking rumours of a romance between them. </p> <p>According to Xavier Bray, “the Duchess of Alba was one of Goya’s most important patrons, I think Goya was obsessed with her. She was very beautiful, extremely rich, a great lover of the arts and to a certain extent she employed him as her “mini court painter”. And yes, he painted lots of portraits of her, made lots of drawings, and the fact that she’s pointing to the ground – on which is inscribed ‘Solo Goya’, ‘Only Goya’ – suggests that only Goya can paint her.”</p> <p>Goya, who lived until the age of 82, survived Napoleon and worked under four monarchies in all. </p> <p><a href="http://www.nationalgallery.org.uk/goya-portraits">‘Goya: The Portraits’</a> runs until January at the National Gallery in London.</p>

Art and technology merge for an interactive experience of Goya