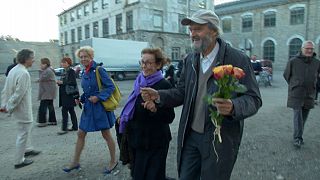 <p>He is the most performed living composer in the world. </p> <p>A devout Russian Orthodox, Estonian composer Arvo Pärt, who turned 80 this year, is often described as <a href="http://www.npr.org/sections/deceptivecadence/2015/09/11/439247120/get-to-know-one-of-the-most-performed-living-composers">mystical, monk-like and reclusive</a>. </p> <p>He made his name in the Soviet Avant-Garde period with musical experimentation, inventing his own form of music called Tintinnabuli. While his music is in part inspired by Gregorian chant, its universal appeal transcends genres.</p> <p>“His music makes you feel and think. You can’t just hear this music, but you have to listen to this music,” says Annu Kivilo, Director of the Arvo Pärt Centre. </p> <p>“It is playful, beautiful, very beautiful, but also very demanding. It’s just wonderful music,” says Mikko Fritze, Director of the Goethe-Institut Finland. </p> <p><iframe width="560" height="315" src="https://www.youtube.com/embed/VdNvEYKi4ag" frameborder="0" allowfullscreen></iframe></p> <p>Pärt’s music became internationally renowned as he was forced to emigrate from Estonia to Vienna and then Berlin in 1980 with his wife and two sons after a prolonged struggle with the Soviet authorities.</p> <p>His encounter with German producer Manfred Eicher from <span class="caps">ECM</span> Records led to the recording of the world famous composition ‘Tabula Rasa’ with Keith Jarrett and Gidon Kremer. </p> <p><iframe width="560" height="315" src="https://www.youtube.com/embed/eyAR3v0tpZw" frameborder="0" allowfullscreen></iframe></p> <p>Today, musicians as varied as PJ Harvey, Rufus Wainwright and Nick Cave all claim him as a major influence on their work.</p> <p>Estonian conductor Tonu Kaljuste, who knows him wells, says his friend has this magic touch: “It’s difficult to explain, but it happens for some composers, with some artists. In our noisy time, I think that Arvo Pärt brings us closer to silence. And his music gives balance for many many people.”</p> <p>2015 has been a busy year for Pärt, with concerts, TV broadcasts and special renditions of his work, as well as two documentaries. </p> <p><a href="http://accentus.com/productions/arvopaert-robertwilson-thelostparadise">For ‘The Lost Paradise’,</a> the composer allowed a camera to follow him for a whole year. The documentary is framed by the <a href="http://accentus.com/productions/adams-passion-a-world-premiere-performance">stage production of</a> ‘Adam’s Passion’, a music theater piece featuring three key works by Arvo Pärt and brought to the stage by US director Robert Wilson. </p> <p>While you may not recognise his name or be sure you have ever heard his music, chances are you most probably have: his compositions regularly appear in film scores, ranging from documentaries, to arthouse movies and Hollywood blockbusters like last year’s Oscar-winning ‘Gravity’.</p> <p><iframe width="560" height="315" src="https://www.youtube.com/embed/ufsrgE0BYf0" frameborder="0" allowfullscreen></iframe></p>