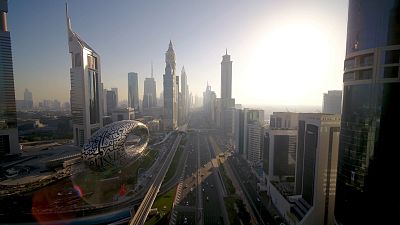 Dubai is a city of modern architectural wonders. Innovative and ambitious, it continues to push boundaries. At over 828 metres and more than 160 stories, the Burj Khalifa is the tallest building in the world. It was designed by Skidmore, Owings & Merrill LLP (SOM) and is a combination of bold vision and science.

“One of the biggest challenges was how do you get it to stand up? Being as tall as it is and withstand the forces of the wind, because that's really the bigger challenge of it. So that was quite a bit of inventiveness with our structural team to work against that.”

While the Burj Khalifa continues to dominate the city's skyline, the newest jewel in the crown for Dubai's architecture is the Museum of the Future. This seven-storey landmark has been described as the most beautiful building in the world. Its stainless-steel facade extends over 17,000 square metres and consists of 1024 plates manufactured entirely by robots and is adorned by Arabic calligraphy.

Dubai is increasingly conscientious about both the environment and local heritage, something Sumaya Dabbagh, Founder of Dabbagh Architects, is passionate about.

She and her team are behind the Mosque of Light, a contemporary mosque that has a white glass reinforced clad facade covered in geometric forms and calligraphy.

“I think it's an example of an emerging architecture that is you don't see often in the region. There is the subtleties. There’s contextualism. And with the mosque in particular, I think addressing a kind of what is Islamic architecture? Often mosques tend to really refer to the past without really any kind of looking into how these can be contemporary. How can they be relevant to our time now?”, she said.

The historical quarter of Al Fahidi next to Dubai Creek is a prime example of mid-19th century architecture in Dubai. As you look up from the twisting alleyways you can see the traditional wind towers called Barjeels. Made of gypsum, sandstone and palm wood, they were designed for cooling in the days before air conditioning.

Dewan Architects + Engineers are one of the oldest practises in Dubai, but have their sights firmly on the future. They've just launched Babel 4.0, a metaphysical reinterpretation of the mythical Tower of Babel. It's their first architecturally inspired NFT that will encourage communities to exchange ideas in the metaverse.

“We thought for us, the metaverse is more of a community. It's something that we need to give back and there's something to share information. So, you know, the original Babel, the Tower of Babel was sort of all the humanity running away from wars and getting it together. So we thought we'd develop something like that, but really for design.”

Dubai is a city that has come a long way since the 1980s, when the only tower on the Sheikh Zayed Road was the World Trade Centre, historically called Sheikh Rashid Tower.

“I've stopped betting against Dubai a long time ago. You know, everything they've done, they've said they've delivered. They have managed to create a hub, an area where everyone enjoys living. It's the world leader in terms of construction and projects.”