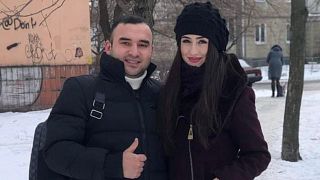 A Ukrainian family of three, who fled war-torn Kyiv in search of safety in the UK, were forced to miss their flight to the Midlands due to Ryanair’s pre-departure checks.

Venera Muminova, her partner, Azamat, and their two-year old daughter, Kamila, were due to stay with couple Michelina and Richard Primrose in Nottingham.

The two families connected via a Ukrainian Facebook group, after the British couple failed to hear back from the UK Home Office’s scheme aimed at helping those escaping the Russia - Ukraine conflict.

Muminova and her family were left without a home, after Russian shells targeted and destroyed it several weeks ago.

According to Michelina Primrose, Azamat continuously tried to check-in online but due to a lack of internet connection, was unable to do so successfully. They also did not have access to a printer.

After turning up three-hours prior to the flight’s departure, the family were faced with questions over the father’s passport, as he is a Turkmenistan national - which means he is not required to fight in Ukraine. But with all three family members equipped with UK visas, this should not have been a problem.

Trouble continued, as the airline then demanded the family pay £50 (€60) to have their boarding passes printed by the airline.

The family contacted the Primroses, who agreed to cover the extra cost. But, after joining the queue again, they were told that it was ‘too late’ as ‘the gate [had] shut five minutes ago.’

In fact, there was still over an hour until the plane was expected to depart. Michelina spoke to a member of Ryanair’s staff, and asked to speak with a manager to explain that the family were fleeing Ukraine.

"She was not having it," says Michelina, "she wouldn’t let me speak to a manager, was not showing any sympathy, said they could have downloaded it in Ukraine."

"I was trying to explain, they just don’t have the facilities to do that," she adds.

With a lack of options and time running out, Michelina directed Azamat to the Ryanair help desk to see what could be done. She explained the situation to a representative, who said the family would need to buy new tickets.

The initial tickets had cost the Primroses £196 (€237) but had since risen to £300 (€362). The next possible flight the family could take was eight hours later, arriving at London Stansted.

The flights were booked and paid for, but in the meantime, the family had to wait in the Polish airport with little access to facilities.

"They didn’t have any money so they couldn’t get any snacks," explains Michelina.

The Primroses tried to contact Ryanair by telephone, but were told a complaint would have to be made via the airline’s website.

"I was disgusted, I was angry," says Michelina, who does not want this to happen to any other family.

In a statement made by the airline, Ryanair said they are happy to refund the £286 (€343) paid for the later flight between Krakow and Stansted.

The airline refutes the Primroses' claims that "prices for flights from Poland seem to be going up all the time."

Ryanair’s website states, "If you arrive at the airport without your printed online boarding pass, we can print one for you, but you will be required to pay a 'Boarding Card Reissue Fee' of €£20."

“They owe the family an apology”, says Michelina. ‘[They] had to leave their loved ones, and to treat them like that is disgusting, they need to feel thoroughly ashamed of themselves." she adds.

According to the Primroses, the Ukrainian family has settled in, and there are lots of toys for Kamila. They are now doing "fine," Michelina explained.