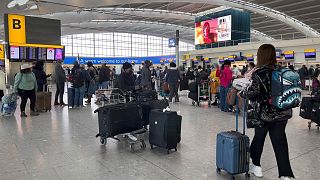 Arrivals from South Africa will no longer need to quarantine in a government-mandated hotel.   -   Copyright  AP Photo/Frank Augstein
By Lottie Limb  •  Updated: 14/12/2021

The UK is removing all countries from its red travel list, just weeks after reactivating the list in response to the new Omicron variant.

As of tomorrow, 15 December, people arriving from 11 African countries will no longer need to stay in one of the government-run quarantine hotels.

People currently in a UK quarantine hotel will also be allowed to leave early, as long as they do not test positive for COVID-19.

However all current testing requirements will remain in place, Transport Secretary Grant Shapps confirmed on Twitter this afternoon.

From 4am on Weds 15 Dec, ALL 11 countries will be removed from England's travel red ? list #Internationaltravel (1/3)

The removal of South Africa, Nigeria and other countries from the quarantine category was first announced by the Health Secretary Sajid Javid in Parliament - where he added that all countries will be removed at 4am tomorrow.

It follows speculation from the travel industry that the red list would be abandoned once Omicron had spread beyond the control of travel bans. Earlier today, it overtook Delta as the dominant variant in London, accounting for over 50 per cent of cases.

Which countries are being removed from the UK’s red list?

The countries that will cease to be on Britain’s red list as of 4am tomorrow are:

What are the current testing rules for UK arrivals?

The UK recently updated its travel rules, stipulating that all arrivals must now show a negative pre-departure PCR or lateral flow test that was taken within 48 hours of arriving.

This is in addition to a day 2 PCR test, which both UK citizens and visitors must await the results of in isolation. The rules vary for unvaccinated travellers.

When is the travel update due?

The current testing rules will be reviewed in the first week of January, Shapps says.

That could be subject to change if there is a significant development in the COVID response, however.

“As always,” the Transport Secretary says, “we keep all our travel measures under review and we may impose new restrictions should there be a need to do so to protect public health.”

With news that the UK is again emptying its red list, those currently isolating in quarantine hotels are wondering what the announcement means for them, and whether they can leave early.

Previously those in quarantine hotels in the UK have had to remain until the end of the isolation period.

However, at 18:30 GMT Stephen Barclay MP, the Cabinet Office Minister, announced to the House of Commons that anyone in a quarantine hotel would be allowed to leave early - unless they test positive for COVID-19.

Currently, no one from the government has confirmed whether those leaving quarantine hotels early will be entitled to a refund. Euronews Travel has put this question to the relevant UK government departments and is waiting for a response.