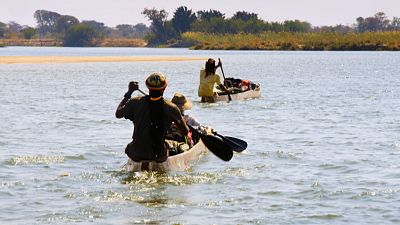 Copyright  euronews
By Karolina Ensor with Courtesy of the National Geographic Society  •  Updated: 07/04/2021

What began as an adventure down an unexplored Angolan river has turned into a six-year mission to understand and protect one of the world’s last intact wetland wildernesses. A crew of National Geographic scientists, explorers and filmmakers made it their mission to traverse the many Angolan rivers that supply water to Botswana’s world-famous Okavango Delta.

Since 2015, the National Geographic Okavango Wilderness Project team has travelled thousands of kilometres on the Angolan rivers that make up one of the last intact wetlands in the world – a watershed area larger than England.

"We had one goal in the beginning, which was to understand and to discover. And we’ve done very well in that regard," explains the National Geographic Okavango Wilderness Project's leader - Dr. Steve Boyes. "We've got probably somewhere in the region of 13 new species to science. We've got hundreds of species not known to be there."

Conducting biodiversity surveys and collections, the team has helped to build a better scientific picture of the region.

"Discovering Angola and documenting Angola scientifically. There is no other way to describe it. It’s a dream," says Kerllen Costa, the project's country director.

On their first expedition, the team expected a normal river but what they found was a marshy area. It turned out to be an incredible scientific discovery. While on expedition in 2015, the team cored into the bog-like soil and discovered peat - an accumulation of partially decayed vegetation.

"We’ve discovered a peatland resource that is probably in excess of 35 to 40,000 square kilometres. That is the second-biggest system of peatlands in Africa," says Dr. Steve Boyes. "That is a giant sponge releasing water into these rivers."

Peat holds ten times its weight in water which ensures that even as climate change can lead to drier years, the water of the Okavango watershed keeps flowing. Peat also absorbs excess carbon in the atmosphere, helping to mitigate the global effects of climate change.

"During the process of discovering these new things, about a landscape that no one really knew anything about, we found new opportunities, the potential for protected areas," Boyes reveals.

Each year, 2.5 trillion gallons of pristine water flow from Angola to support the lives of thousands of people and countless wildlife in Botswana’s Okavango Delta. But the rivers that supply this water in Angola are not protected from commercial development, wildlife trafficking and deforestation.

For the project, the goal is to work with local communities to protect this entire watershed area and help Angola reap the benefits of the water in a sustainable fashion.

As Kerllen Costa outlines, reaching out to the local communities that inhabit these areas is key to ensuring the project's success:

"Reaching as many people as possible is the main goal because that’s how we can guarantee the well-being of these people and consequentially the environment around these people."

The project’s work to protect this ecosystem has helped highlight the global importance of south-eastern Angola. Dr. Boyes points out the telltale sign of elephant tracks:

"Lots of broken branches as you can see. And on the ground as well. This elephant was here less than a week ago."

Already this project is inspiring hope in many Angolans that through protection and the establishment of a sustainable conservation economy, they could one day see populations of some of Africa’s most charismatic species returning to these stomping grounds in Angola once more.

Does this Italian girl have the best home school set-up in the world?

Greece removes quarantine for EU, UK, US and other travellers