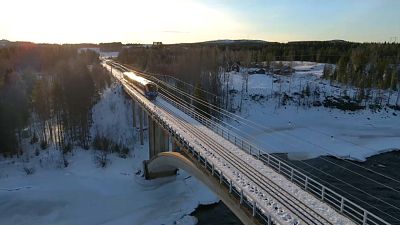 Fans of slow travel might soon be able journey all the way from central Europe, through Sweden and Finland and ending up in Lapland.

Despite sharing a 545-kilometre border, Sweden and Finland's railways are not connected. But with a train station in the Swedish border town of Haparanda having just been refurbished, they are a step closer to allowing for travel between the neighbouring countries.

Last Thursday, for the first time in 29 years, a train pulled into Haparanda's refurbished station. Trains can now travel between there and Luleå, a town further into Sweden.

Finland, meanwhile, is showing its commitment to eco travel by electrifying a 20km stretch of track near Laurila in Lapland.

"The start of passenger traffic to Haparanda is strategically important for achieving cross-border traffic between Sweden and Finland," says Nils-Olof Lindfors, deputy chairman of the board at RKM Norrbotten.

It is hoped a cross-border passenger train between the two countries will lead to long-distance travel from the south. This could be possible by 2023.

"This creates great opportunities both for Sweden and Finland," says Nina Forsell, Executive Manager at the Finnish Lapland Tourist Board.

"Usually we have a lot of international guests, who arrive by plane, but now this gives them a new opportunity.

"Many customers come to Lapland for nature and the activities. So taking a slow train across the border may be an alternative."

Don't approach whale carcass it may explode, Swedes are warned