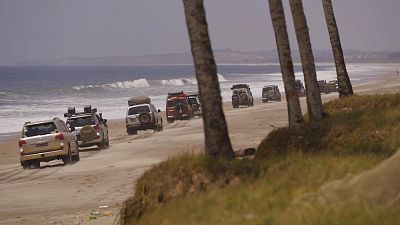 There’s no doubt that Angola is one of the most beautiful countries in the world and just waiting to be discovered. That's why we decided to follow a group of 4x4 enthusiasts on a ride to discover the country's urban areas, incredible nature and magnificent beaches.

The members of this 4x4 club start their day of exploration and adventure in the Port of Luanda. For them and their families, overlanding is a passion, so the 130 kilometre journey to the mouth of the River Onzo is not long. There are also lots of stunning stops along the way.

21 vehicles take part in the trip. The first section heading out of Luanda into neighbouring Bengo province is on-road. It offers them the chance to catch some urban and rural scenery, and local community life.

Yuri Maio Guimarães is the President of Toyota Land Cruisers' Angola Group. He tells us that the group feels free with their cars and that "Angola is a huge, unexplored country. It has a lot to show not only to Angolans, but also to the world. We, as a club, want to take advantage of this".

As they head out of Bengo Province and venture off-road towards the coast, they are greeted by the breathtaking view from the Lifune overlook, a dramatic cliff-top location.

The group's adrenaline starts pumping as they take to the sand.

A love of nature and overlanding is what unites the 4x4 club drivers. But they are also aware that their love of driving cannot be at the cost of the environment. As one of the participants of this trip says, "normally, when I visit somewhere, I leave it cleaner than I found it. We can really have fun, we can enjoy nature, hunting and fishing in a much more responsible way. If we have that attitude, who knows, maybe in 20 or 30 years from now, our children will be able to enjoy these pleasures".

When the group arrives at their final destination, the mouth of the River Onzo, they have time to kick back, relax and splash about in the water. You can do the trip in two hours or make a day of it, at a more leisurely pace.

Yuri Maio Guimarães tells us that even being less than 100 kilometres from the capital "we enjoy a healthy environment, we have the river on our left, the sea on our right. Angola is full of these places. Whenever we can as a club, we do these trips".

"Come and visit us to experience good times in great Angola, this beautiful country"

The drivers are so taken by their hobby and Angola that they are keen to share it with visitors. But if the beach isn't your scene, there's much more. Adelino Chaves is a member of the group and he takes part in their trips. He says "we are lucky to have a country that offers a thousand and one possibilities and, above all, variety. We can move from the forest to the desert, to the central plateau. Each place has its own vegetation and particularities. We have the coastal strip, the sea. We have endless variety".

Alfredo Oliveira, the 4x4 trip leader, encourages everyone to join in and enjoy the unparalleled beauty Angola has to offer.

Meet the Cuban hotel owners turning to farming for survival