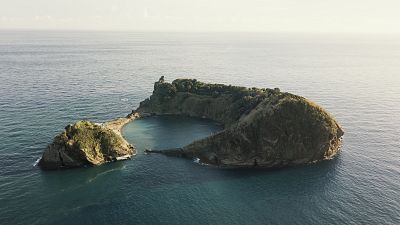 Jagged volcanic peaks emerging from cool mist and tumbling down to bays that shimmer like liquid jade in the sun, pristine canyons and waterfalls and clear waters teeming with whales and dolphins—the archipelago of the Azores is not the stuff of idle reverie but a fresh burst of paradise and symphony of nature. Dazzling in their beauty, the nine islands of the Azores are actually the peaks of giant underwater mountains that originated from the staggering 1766 volcanos found in the archipelago (only nine of which are still active) and the dry calderas, crater lakes, hot springs and grottoes that mark the islands' terrain are a window on the wonders that volcanic forces can do. It's all in the Azores Geopark, part of the European and Global Network of Geoparks, and the 121 geosites of the Azores are yours to discover. Glistening green pastures patterning the slopes of the calderas, the mistérios, or mysteries of the lava fields and call of the blue sea: the Azores will recharge your batteries and soothe the tired modern soul.

The mild, subtropical climate of the Azores means you can breathe in the energising marine air everywhere here and regardless of the season. But if finding your bucolic bliss means being able to put the travails of the 21st century on pause, you won't have to sacrifice creature comforts because though remote—the island chain is located in the mid-Atlantic some 1,400 kilometers west of Lisbon—the Azores are also an integral part of Portugal. Sustainability is second nature: Azoreans know their islands are an exceptional gift of nature, making ecotourism not just a trend here but a way of life. The Azores are perhaps the planet's best example of an accessible island vacation that showcases a unique geological setting at its most pure; protected eco-regions and certified biospheres are the rule not the exception and an endless array of adventure-oriented activities await, from hiking upwards of 89 trails and canyoning and paragliding to geotourism, whale-watching and even surfing, and always minus the crowds. Scenic footpaths are ordered by three levels of difficulty: easy, medium and hard. And there's always the asphalt option: Thanks to its modern road network you can explore the Azores' awesome landscapes in safety on any number of beautiful drives. Island cities offer a chance to enjoy authentic architecture and a dive into the fascinating Portuguese heritage—knowing that the best of nature is never far.

São Miguel is called Ilha Verde, the "Green Island" and indeed its lush landscapes invite comparisons to the Hawaiian islands. Those who like scenic drives won't be disappointed: when the European Rally Championship regularly hosts a round here you know it's for a good reason: the hairpin curves and crests reveal one spectacular view after another and the roads themselves are often quite a sight, lined with colourful hydrangeas on either side. At Lagoa Verde Azul the lush green peaks drop precipitously to the ocean. Take in the majesty of the caldeiras vulcânicas, the volcanic calderas of which the most iconic is Lagoa do Fogo, the Lake of Fire where you can hike right down to the shore. For those with the stamina, the hike from Vista da Rei lookout to the caldera floor of the Sete Cidades twin crater lakes takes about two hours. At Termas da Ferraria hot mineral springs meet the ocean, literally; you can also swim in pools at ocean's edge surrounded by black volcanic rocks, whether shrouded in mist or under the clear sunlight, at the Piscinas Naturais da Caloura and Piscinas dos Mosteiros.

If you find yourself at Lagoa das Furnas you may notice not only the iron-infused water bubbling up through the thermal vents but also islanders placing steel pots inside them stuffed with chorizo and vegetables to make the stew called cozida das Furnas. Such locally-sourced dishes turn up everywhere, including restaurants in Ponta Delgada, the largest city on São Miguel —first settled in the mid-15th century—and economic capital of the Azores. Like Ponta Delgado, historic Vila Franca do Campo is located on San Miguel's southern coast. From the town it's a must to take the short ferry to Ilhéu de Vila Franca, an islet and protected nature reserve with a perfectly round lagoon at the top of an ancient submerged volcanic cone. A biome and excellent scuba spot too, the islet is a model of sustainability with strict limits on the number of visitors.

The central island of São Jorge takes the form of an elongated, sheer-sided ridge that makes for stunning natural sites such as Fajã dos Cubres with its luxuriant countryside and tidal pools and Poça Simão Dias where cliffs drop to a pool of sapphire blue water. Pico Island, the Ilha Preta or Black Island, is synonymous with volcanic vistas on account Mount Pico, which at 2,341 meters is the highest elevation of the Mid-Atlantic Ridge. The three-hour hike to the top of the volcano is especially exhilarating at sunrise or sunset. Less strenuous activities are possible too; these include exploring the island's lajidos (lava fields) and Gruta das Torres lava tube cave grotto. Pico island's black volcanic soil also nurtures the vineyards that produce the island's crisp white verdelho wine.

If rebooting your sense of inner peace means spending some quality time on the beach, then put Santa Maria high on your list of the Azores to visit. Often called the "Algarve of the Azores," it is the oldest island in the archipelago, geologically speaking, and as such is graced with only soft white sandy beaches. While still part of the broader Azores Geopark, three of the Azores have been designated by UNESCO as biospheres: Corvo, Graciosa and Flores; the latter is an ideal destination for canyoning and "chasing waterfalls" as they tumble into ravines of deep green. Soft adventure options like whale-watching abound in the Azores and that extends of course to the ocean: nutrient-rich waters warmed to between 17 and 24 degrees celsius by the Gulf Stream attract blue whales, sperm whales and bottlenose and common dolphins in great numbers. A third of the world's cetacean species live at least part of the year in Azorean waters.

The Azores are fertile country for adventures in gastronomy too; you'll find many a fine restaurant to savor in Angra do Heroismo, the capital of Terceira island, while cosmopolitan Horta on the island of Faial is a magnet for transatlantic sailing traffic, giving it an exciting array of dining spots. But in each of the islands and wherever you go the contemporary sensibility is coupled with preservation of the natural state and sustainability. So come breathe in the fragrance of these extraordinary garden islands—because a journey to the Azores not only means discovering the wild and peaceful side of nature, but maybe rediscovering yourself, too.