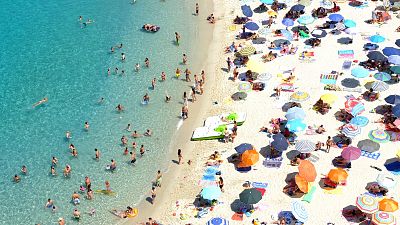 Beachgoers on some of Italy’s busiest stretches of sand could see some interesting new measures implemented to limit visitor numbers this summer.

The country is one of Europe’s worst hit by the COVID-19 virus and is likely to miss out on billions of euros of income due to a lack of tourists this year. Tourism is one of Italy’s main industries, contributing to around 13 per cent of GDP in 2019 according to Statista. As Europe’s third most popular destination, foreign tourists spent 25 and a half billion euros in the country in 2018.

Some ideas to allow visitors to maintain social distancing guidelines on the beaches include electronic bracelets to enforce caps on numbers and booking apps to provide allocated times slots. One-way flow systems and umbrellas spaced a minimum of 5 metres apart could also form a part of measures to keep beachgoers safe, as resorts consider reopening during the peak season.

Sardinia’s La Pelosa beach had already planned to introduce a ticketing system limiting admission this year, in an effort to reduce erosion that has been putting its ecosystem at risk.

According to Italian newspaper, Sassari Oggi, numerous biomonitoring projects found that microbial populations were being damaged by sun-seeking travellers. Researchers are worried this could have a knock-on effect for the rest of the marine life that inhabits the beach.

Italian Unesco Heritage site, Cinque Terre, also had to consider caps on tourists in 2016 as 2.4 million visitors came to walk its delicate coastal paths. A landslide in 2012 caused rocks to cascade down on a group of Australian tourists resulting in four ending up severely wounded. The Local Italy reports that train companies were asked to reduce services in 2019 to the area, in order to prevent damage to the hotspot. They hoped this would create an ‘overcrowding alert’ that would prevent more passengers from getting off at the town once a maximum number had arrived.

It’s too early to tell what impact the imposed measures to limit the spread of the virus could have on Italy’s beaches. They may, however, provide some interesting insight into how reducing the number of holidaymakers at Italy’s most popular destinations can allow the country to recover from over-tourism.

Officials in Brussels are pushing to reopen borders in time for the summer season, but the response of individual governments is likely to rely on how well the country has dealt with the virus.

Back in Italy, beachside business owners are saying that, unless its borders are opened to allow tourists, they are unlikely to survive. Travelling between regions is still prohibited and international travel has all but disappeared. “We are ready to reopen, but if tourists do not come back, if borders are not reopened, and if hotels do not fill up, the costs of running a restaurant will be unsustainable,” Salvatore Parisi, owner of a top restaurant in Taormina, Sicily told Reuters.

The answer, however, could be closer to home. Initiatives for getting the tourism industry moving again include inviting the country’s citizens to spend the summer appreciating the world-class destinations on their own doorstep. The Italian government is planning incentives to encourage its roughly 60 million population to look more locally when planning this year’s getaway, instead of taking flights abroad.

As part of the ‘Relaunch Decree’, this would see families offered a €500 tax credit to travel within the country this summer.

Mayors angry over lack of social distancing after lockdown eased