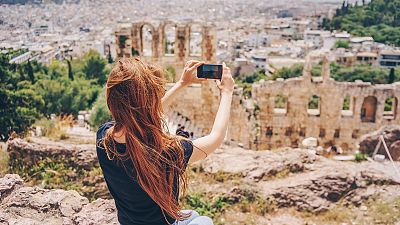 If the monuments of the bustling Greek capital are instantly recognizable as Athenian—think Parthenon, ancient Odeon of Herodes Atticus theater and Panathenaic Stadium—tuning in to the unique rhythms of Athens is a slightly different kind of exercise. With some three and half millennia behind it, you might think that Athens is only defined by its past but that's only part of the story: this is a modern and multifaceted Mediterranean metropolis. So, yes to captivating ruins and cozy Greek tavernas around Plaka, but you'll also find sizzling rooftop bars, buzzing cafes and just a few minutes' stroll from ancient temples, street art so vibrant it practically leaps from the walls. The moment you start looking beyond the Acropolis is the instant you start to discover your inner Athenian.

Of course, antiquity really does make a star turn in Athens. For one of the most beguiling urban walks in the world, follow the marble path from Dionysiou Areopagitou Street up to the top of Filopappou, also known as the Hill of the Muses, and behold a stunning panorama of the city that extends south to Piraeus and the Saronic Gulf. And at any time of year, it's imperative to climb the steps to the top of the Areopagus Hill, site of an ancient court and now the hottest selfie spot in Athens (when you see the views from up there, you’ll get the picture). Another must is the ancient Athenian agora. In a way it's as iconic as the Acropolis and no less gorgeous, with olive trees swaying gently over the ruins. It's also where you'll find the Temple of Hephaestus, the best-preserved ancient Greek temple in the world.

As a counterpoint to the painted vases, ostraka (the potsherds used as ballots for ostracism) and other artifacts in the excellent Museum of the Ancient Agora, you can dive into Monastiraki, with its dynamic mix of shops selling everything from genuine antiques to all manner of flea market collectibles—by night, the area crackles with hipster bars and restaurants. If you make your way across Ermou Street by the Thiseio metro station you will find yourself in the enchanting, graffiti-splashed district of Psirri, where you'll see works tagged by renowned Greek street artists like Ozone, Cacao Rocks and Vasmou. For the more adventurous urban explorer there's even more street art to spot in the edgy neighborhoods of Metaxourgeio and Gazi. Sticking to the commercial center and just off Athinas Street, things take a fragrant turn in the authentic spice market shops of Evripidou Street, in the very heart of Athens.

Athens is one of the world's best cities for nightlife with bars and clubs that stay open famously late—so what better way to relax after an evening of sampling local spirits like mastiha and tsipouro than by taking a seaside stroll the next day? It's easier than you might think: a short ride on the modern Athens metro will take you to Piraeus, the port where you'll find the ferries to the Greek islands but that is also home to leisure harbors where Athenians go to unwind by the water. Settle into a seaside café in the Zea Marina or Microlimano sections and sip a Greek coffee and pastry as you watch the boats bobbing in front of you. Check out the fine Piraeus Archaeological Museum and ruins of the ancient Cononian walls that once protected the port from invasions by sea.

A newer Athenian favorite is the Stavros Niarchos Foundation Cultural Center (SNFCC), a spectacular cultural complex designed by renowned architect Renzo Piano and considered by some to be a modern-day Acropolis. The gleaming main building is home to the Greek National Opera but what draws the locals during the day are the exquisitely landscaped contemporary Mediterranean gardens. Away from the cultural showstoppers like the Acropolis Museum and National Archaeological Museum are lesser-known gems like the Museum of Cycladic Art and Benaki Museum of Greek Culture. In the Numismatic Museum, housed in Heinrich Schliemann’s elegant 1880 mansion, you can gawk at coins that may have once jangled in the pockets of Pericles or Plato—how's that for both classic and cool?

Speaking of philosophers, the ruins of Aristotle's Lyceum (site of his famous Peripatetic School) invite meandering in a garden setting tucked between ritzy Kolonaki and the up-and-coming district of Pagrati. This along with the Koukaki neighborhood slightly closer to the Acropolis is emerging as an Athenian foodie destination par excellence, with young Greek chefs putting all manner of modern spins on the Greek classics. Pagrati is also proud home to the new Basil & Elise Goulandris Foundation Museum, where you can come to inspect the Picassos and modern Greek paintings before indulging your new inner Athenian at the museum's fantastic organic open-air café—just like the locals do!

Anthony Grant has blogged for The New York Times and co-hosted a morning news show in Tel Aviv. You can follow his winter/spring journey around Greece on Instagram at "athenianation."

What is the argument against lifting COVID vaccine patents?