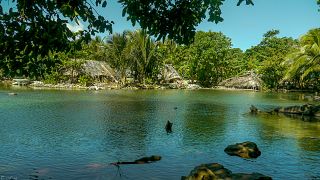 Corto had discovered this isolated piece of land in a book. Tikopia is far from any traditional maritime route, its singular civilization has evolved up until the present day almost without any external influences. The island is ruled by tribal chiefs and Ti Namo, the king.

In this civilization, people have a special relationship with their island, which is considered alive and they involved it in all decisions.

It was already a good enough reason for Corto Fajal to desire meeting the island's inhabitants, a project that ended up in making the documentary "We, Tikopia".

After having done two multi-month expeditions in 2014 and 2016, and carrying out a humanitarian aid to alleviate the shortage of drinking water on the island, the team could start the post-production of the documentary. It has involved translation from a language spoken by no one else but the Tikopians as well as editing the 123-hour-long footage recorded during the 6-year adventure.

In an organic sound and musical atmosphere, the film shows, like a mirror, the reflection of our world and illustrates the choices determining the survival of a civilization. As the documentary focuses on the organic link which connects the Tikopians to their island and vice versa, it turns out to be a bit of the great story of humanity, told on this miniature Earth.

Click on the video above and take a sneak peek at the life on Tikopia. The French documentary made its nation-wide debut in France on the 7th November.