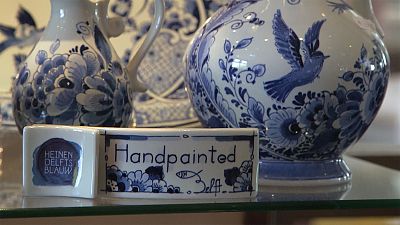 Delft Blue is the world-famous earthenware that has been produced in the city of Delft in the Netherlands since the 17th century.

The region is famous for its unique Delftware or Delft blue and white pottery, known as Delft Blue, where a particular blue colour has been added to a China-inspired local version of the pottery. Between 1600 and 1800, the earthenware was popular among wealthy families who would show off their Delft Blue collections to one another. Although the Delftware potters preferred to call their earthenware “porcelain”, it was only a cheaper version of the real Chinese porcelain. Delft Blue was not made from the typical porcelain clay, but from clay that was coated with a tin glaze after it was fired. In spite of this, Delft Blue achieved unrivaled popularity, and at its peak, there were 33 factories in Delft.

Today, Delft Blue is the general term referring to the product, but there only a handful of companies producing the hand-painted traditional pottery. Euronews visited one called Heinen Delfts Blauw, which has bought an old manufacturer in Delft that was called PAAUW 1651. This is one of the last remaining workshops in the Netherlands still using traditional, Delft Blue pottery techniques.

Euronews journalist Doloresz Katanich visited the traditional workshop to find out more about the unique creation of a renowned, audacious designer and a master artisan who continues to employ the time-honoured know-how dating back to the 17th century.

As a small girl, Wilma Plaisier dreamed about working with Delft blue. She started 17 years ago, and today she is one of the last remaining master painters practicing this traditional craft. The antique Dutch pottery was originally inspired by Chinese porcelain, but eventually the unique colour brought international acclaim.

"The paint that we use contains cobalt oxide, and cobalt oxide is black in its original shape when you find it in the ground and when you fire it at approximately 1,200 degrees Celsius it changes colour, and it turns into blue," explained Wilma Plaisier, a master painter at Heinen Delfts Blauw.

The product is completely handmade and the designs only ever feature the blue tones, incorporating several different shades.

In order to marry the traditional craft with modern design, Plaisier teamed up with renowned Dutch product and interior designer Marcel Wanders to create something unique.

Under the creative leadership of Marcel Wanders, a multi-disciplinary design studio in Amsterdam with a team of 40 breathes creativity across a multitude of projects, working with a host of premium brands, spanning Alessi and Baccarat to Louis Vuitton and Swarovski, and a number of leading hotels around the world. Today, many of Marcel Wanders’ designs are celebrated in some of the most renowned museums in the world, including the Centre Pompidou in Paris, the MoMA in New York and the Stedelijk Museum in Amsterdam.

"When I worked with Marcel on this piece he actually sculpted the different sections of the project by hand, so I had every individual piece on my table and every piece was different," said Plaisier.

Euronews met with the renowned designer in Amsterdam, just after he finished the artwork in his studio before it goes on display at the Homo Faber exhibition in Venice.

Wanders, who is best known for his audacious designs, has previously worked on a number of projects dedicated to the traditional craft.

"If I work with Delft blue, I put something very raw in place of it. Next to some things that are very light and beautiful. I think it is beautiful if there is this raw energy and this refined energy and they come together like you see in this work,"Wanders told Euronews.

The creation is a "one minute piece" - a signature design of Marcel Wanders. He formed the separate parts, by hand, in just one minute. This can be seen in the juxtaposition between the top and bottom of the design. A traditional painting style and modern shape has been used on the base, while the upper part has been created using a traditional mould and has contemporary painting.

"Delft blue for me is super important because it is national. It is like my team. It is my uncles, it is my aunts, that have made it for hundreds of years; so obviously, you know my mom used to have one and of course, nobody liked it, [but] I liked it. So it is my culture that I can embrace," Wanders added.

The creation is one of the original artworks, which will be displayed at the Homo Faber exhibition, a major event organised by the Michelangelo Foundation and held in Venice in September, dedicated to European craftsmanship.