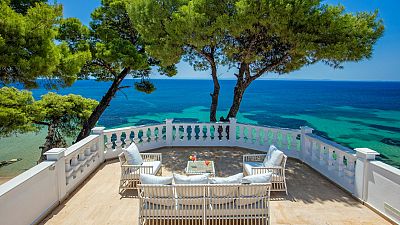 It’s easy to fall into hyperbole when it comes to Danai. I just can’t help myself; three days isn’t long enough to get bored of holding court in a beachside cabana like some medieval lord at a banquet. It is long enough however to achieve the gut of one, but what was I going to do? Not be a glutton? Give me a break.

Set on the twinkling, painfully pretty coastline of Halkidiki, Danai isn’t some sprawling estate or grand hotel. In fact, with just a relative handful of suites and villas it’s almost boutique. In philosophical terms it is; it’s just that it’s hard to equate the word ‘boutique’ with a place that has two of its own restaurants and plenty of suites with private pools.

My own room was one of the simplest, but that’s not to say it was sparse. If it wasn’t surrounded by larger suites I’d call it palatial; as things stood it was bright, airy and comfortable, pleasantly-billowing drapes and all. Oh, and it had three bathrooms. I made a point of using them all. The finishing touch was a balcony perfect for a cigarette before bed which, as I’m one of those awful people that only smokes after a few drinks, might indicate how much I indulged elsewhere.

As a cocktail obsessive in fact, the drinks were for me Danai’s crowning achievement. The pair of mixologists at the Philosophy Seaside Bar seemed to revel in making drinks to make even Aristotle liven up a bit. Christos, looking every inch the luxury London bartender (pocket watch and all) made one of the finest dirty martinis I’ve had for a while – and I’ve had a lot.

If you’re more inclined towards wine than spirits, then I feel sorry for you. But that’s neither here nor there; at Danai you’d be well-catered for. The resort’s wine cellar is built into the side of a mountain for some natural cooling and holds one of the country’s best wine collections. Fittingly it also holds one of the country’s best sommeliers. Just don’t get Apostolos Plachouras started on Greek wines; he’s one hell of an oenophile orator but your liver might not be able to cope.

Because I’ve been told time and again that you should never drink on an empty stomach I took it upon myself to sample everything the twin restaurants of the Seahorse Grill and the Squirrel had to offer.

The Seahorse is what Greek food was designed for. Punchy Greek salad, simple but done to perfection; grilled octopus that would have made even the cephalopod itself proud to be eaten; enough fresh fish to appease Poseidon – you get the picture. It’s the kind of food you can find all over Greece but upped to five-star standard. Now let’s get the one negative about Danai over and done with.

I appreciate a bit of experimentalism. It’s why I need a Christos in my life. Unfortunately, the gastronomy of the Squirrel wasn’t a patch on the bar. Maybe my palate’s not sophisticated enough for turmeric ice cream with smoked eel or white chocolate, but as far as I’m concerned the tasting menu just didn’t work. It was almost worth going for the view, but only almost.

But then, it wasn’t just the view that kept us gazing over the beach. We warned beforehand that there would be a sight worth seeing and, as night fell the prophecy came true.

Private dinner on the sand

Apparently, it was a birthday celebration for a couple that came to Danai on a regular basis. It started as a private dinner on the sand with Apostolos (a man of many talents) tinkling the ivories as they ate, before dusk hit and a constellation of candles appeared, some on the shore, more bobbing sedately in the ocean.

It was nothing short of spectacular. Apparently, it was also a pretty standard occurrence at Danai. Resort manager Stella – a whirlwind of German efficiency if ever there was one – revelled in recounting some of the… let’s say out-of-the-ordinary extras the staff had arranged in the past. Helium balloons filled with light to imitate the moon, opera singers on the ocean, you name it they’ve done it.

So again, I apologise for being unable to avoid lacing my sentences with superlatives throughout this review, but the fact of the matter is that Danai deserves each and every one.