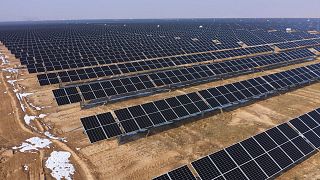 Uzbekistan has set an ambitious goal - to generate 30% of its electricity from renewable energy sources by 2030. Harnessing the sun’s energy is one factor in making this plan a reality. Uzbekistan has an average of 330 sunny days a year and the potential for solar energy is huge.

“This is green energy. This is our future, the future of our children and future generations.”

For instance, French company Total Eren developed one of the first solar station plants in Uzbekistan. Launched in July 2022, the Tutly solar farm is located around a hundred kilometres west of the city of Samarkand. Working at a capacity of 131MWt (megawatt thermals), it generates about 270,000 kWh per year, enough to supply the needs of 140,000 households.

The solar panels here change their position every two minutes. They follow the trajectory of the sun to maximise the most of its energy.  Total Eren, which aims to construct more large-scale solar projects in Uzbekistan, only installed the latest technologies.

“Here, a unique bifacial technology is used, the front side of the modules receives direct sunlight, and the back of them also receives solar radiation reflected from the ground,” says Ayzada Seitniyazova, Total Eren’s managing director for the country.

What has made this possible?

Tenders are organized with the support of international organizations.

“To date, projects with a total capacity of more than 1000 MW in solar energy have been implemented, 800 MW is at the stage of tenders, these tenders are of great interest to international investors, we see investors from Saudi Arabia, the United Arab Emirates, from China, Japan, Korea and this huge interest allows us to receive very competitive tariffs,” says Zafar Khashimov, Senior Country Officer with the IFC.

And it’s not just large-scale projects

Small and medium businesses are also starting to use solar energy in Uzbekistan. Those in the agriculture sector are turning to green energy.

At a sewing factory in Samarkand. The solar panels installed on its rooftop allow residents to save money and be exempt from land and property taxes on the area covered by the panels -- for 10 years.

“There is an increasing demand for goods that are produced with the social responsibility of the manufacturer. The use of energy-saving resources, it is one of the requirements of the modern buyer. They will buy the product produced where ones cares for nature,” Aziz Akhrarov, General Director of Samarkand Apparel.

Uzbekistan’s government has recently launched a digital online platform which allows owners of private houses to buy solar panels in interest-free installments or a 30 percent reimbursement if they pay it all at once.

Speaking to Euronews, Elzod Rakhmanov, Executive Director of the Energy Saving Fund says: “This initiative is primarily due to the fact that the population of the republic is growing, the economy is growing, respectively, the demand for electricity from the population is increasing and the question arises of introducing alternative energy sources as an additional generation of additional opportunities.”

Laziz Khasanov from the capital Tashkent was one of those who has benefited from the new scheme. Now, in winter his solar panels produce up to 25 KWt per day.  In summer it could be twice more. He plans to sell the surplus back to the state.

“Now around the world there is a global problem with energy, electricity, and solar panels take the load off the system. This is green energy. This is our future, the future of our children and future generations.”

Solar panels are installed on the roofs of many state buildings in Uzbekistan. The country aims to maximise its solar energy usage in the years to come.

“This is the competitiveness of the economy, first of all, because tomorrow we need a green certificate, a green component of our products. Secondly, it is ecology, it is environmental protection, reduction of CO2 emissions, and thirdly, it is an economic benefit. That is, to produce electricity with the maximum use of the available solar potential,” says Jurabek Mirzamakhmudov, Uzbekistan’s Minister for Energy.

In short, Uzbekistan is setting its ambitions for green energy high and incentivising both foreign investments and locals to get on board.