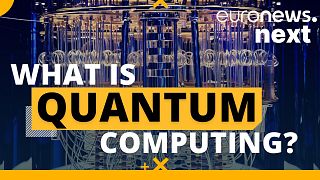 Depending on who you ask, some say that quantum computers could either break the Internet, rendering pretty much every data security protocol obsolete, or allow us to compute our way out of the climate crisis.

These hyper-powerful devices, an emerging technology that exploits the properties of quantum mechanics, are much buzzed about.

Only last month, IBM unveiled its latest quantum computer, Osprey, a new 433 qubit processor that is three times more powerful than its predecessor built only in 2021.

But what is all the hype about?

Quantum is a field of science that studies the physical properties of nature at the scale of atoms and subatomic particles.

Proponents of quantum technology say these machines could usher in rapid advances in fields like drug discovery and materials science - a prospect that dangles the tantalising possibility of creating, for example, lighter, more efficient, electric vehicle batteries or materials that could facilitate effective CO2 capture.

With the climate crisis looming, and technology with a hope of solving complex issues like these are bound to draw keen interest.

Little wonder then, that some of the largest tech companies in the world - Google, Microsoft, Amazon, and, of course, IBM to name a few - are investing heavily in it and angling to stake their place in a quantum future.

How do quantum computers work?

Given these utopic-sounding machines are drawing such frenzied interest, it would perhaps be useful to understand how they work and what differentiates them from classical computing.

Take every device that we have today - from the smartphones in our pockets to our most powerful supercomputers. These operate and have always operated on the same principle of binary code.

Essentially, the chips in our computers use tiny transistors that function as on/off switches to give two possible values, 0 or 1, otherwise known as bits, short for binary digits.

These bits can be configured into larger, more complex units, essentially long strings of 0s and 1s encoded with data commands that tell the computer what to do: display a video; show a Facebook post; play an mp3; let you type an email, and so on.

But a quantum computer?

These machines function in an entirely different way. In the place of bits in a classical computer, the basic unit of information in quantum computing is what’s known as a quantum bit, or qubit. These are typically subatomic particles like photons or electrons.

The key to a quantum machine’s advanced computational power lies in its ability to manipulate these qubits.

"A qubit is a two-level quantum system that allows you to store quantum information," Ivano Tavernelli, the global leader for advanced algorithms for quantum simulations at the IBM Research Lab in Zurich, explained to Euronews Next.

"Instead of having only the two levels zero and one that you would have in a classical calculation here, we can build a superposition of these two states," he added.

Superposition in qubits means that unlike a binary system with its two possible values, 0 or 1, a qubit in superposition can be 0 or 1 or 0 and 1 at the same time.

And if you can’t wrap your head around that, the analogy often given is that of a penny.

When it is stationary a penny has two faces, heads or tails. But if you flip it? Or spin it? In a way, it is both heads and tails at the same time until it lands and you can measure it.

And for computing, this ability to be in multiple states at the same time means that you have an exponentially larger amount of states in which to encode data, making quantum computers exponentially more powerful than traditional, binary code computers.

Another property crucial to how quantum computing works is entanglement. It’s a somewhat mysterious feature of quantum mechanics that even baffled Einstein in his time who declared it "spooky action at a distance".

[The] quantum computer is going to make, much easier, the simulation of the physical world.

"This property of entanglement is very important because it brings a much, much stronger connectivity between the different units and qubits. So the elaboration power of this system is stronger and better than the classical computer," Alessandro Curioni, the director of the IBM Research Lab in Zurich, explained to Euronews Next.

In fact, this year, the Nobel Prize for physics was awarded to three scientists, Alain Aspect, John Clauser, and Anton Zeilinger, for their experiments on entanglement and advancing the field of quantum information.

Why do we need quantum computers?

So, in an admittedly simplified nutshell, these are the building blocks of how quantum computers work.

But again, why do we necessarily need such hyper-powerful machines when we already have supercomputers?

"[The] quantum computer is going to make, much easier, the simulation of the physical world," he said.

"A quantum computer is going to be able to better simulate the quantum world, so simulation of atoms and molecules".

As Curioni explains, this will allow quantum computers to aid in the design and discovery of new materials with tailored properties.

But there could also be some undesirable side effects that have to be accounted for as we enter the quantum age.

A primary concern is that quantum computers of the future could be possessed of such powerful calculation ability that they could break the encryption protocols fundamental to the security of the Internet that we have today.

"When people communicate over the Internet, anyone can listen to the conversation. So they have to first be encrypted. And the way encryption works between two people who haven't met is they have to rely on some algorithms known as RSA or Elliptic Curve, Diffie–Hellman, to exchange a secret key," Vadim Lyubashevsky, a cryptographer at the IBM Research Lab in Zurich, explained.

"Exchanging the secret key is the hard part, and those require some mathematical assumptions which become broken with quantum computers".

In order to protect against this, Lyubashevsky says that organisations and state actors should already be updating their cryptography to quantum-safe algorithms ie. ones that cannot be broken by quantum computers.

Many of these algorithms have already been built and others are in development.

Sure, it has the negative side effect that it'll break cryptography. But that's not a reason not to build a quantum computer, because we can patch that.

"Even if we don't have a quantum computer, we can write algorithms and we know what it will do once it exists, how it will run these algorithms,” he said.

"We have concrete expectations for what a particular quantum computer will do and how it will break certain encryption schemes or certain other cryptographic schemes. So, we can definitely prepare for things like that," Lyubashevsky added.

"And that makes sense. It makes sense to prepare for things like that because we know exactly what they're going to do".

But then there is the issue of data that already exists which hasn’t been encrypted with quantum-safe algorithms.

"There's a very big danger that government organisations right now are already storing a lot of Internet traffic in the hopes that once they build a quantum computer, they'll be able to decipher it," he said.

"So, even though things are still secure now, maybe something's being transmitted now that is still interesting in ten, 15 years. And that's when the government, whoever builds a quantum computer, will be able to decrypt it and perhaps use that information that he shouldn't be using".

Despite this, weighed against the potential benefits of quantum computing, Lyubashevsky says these risks shouldn’t stop the development of these machines.

"Breaking cryptography is not the point of quantum computers, that's just a side effect," he said.

"It'll have hopefully a lot more useful utilities like increasing the speed with which you can discover chemical reactions and use that for medicine and things like that. So this is the point of a quantum computer," he added.

"And sure, it has the negative side effect that it'll break cryptography. But that's not a reason not to build a quantum computer, because we can patch that and we have patched that. So that's sort of an easy problem to solve there".

For more on this story, watch the explainer video in the media player above.