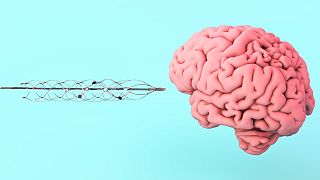 Elon Musk’s Neuralink is betting on brain-computer interfaces, but this company is one step ahead   -   Copyright  Synchron
By Camille Bello  •  Updated: 07/12/2022

Being able to control machines with your mind is no longer in the realm of science fiction.

Several companies are vying to develop brain implants allowing people to do just that - and one of them is run by Elon Musk, the world’s richest man.

The billionaire CEO of Neuralink (and of Twitter, SpaceX, and Tesla) said this week he expected the start-up to start testing its brain-computer interface in patients in six months.

So how advanced are these devices, and what do they promise?

‘The future of communication’

Stephen Hawking famously said brain-computer interfaces allowing the wireless streaming of thoughts into external devices were the future of communication.

The English physicist and cosmologist was diagnosed with amyotrophic lateral sclerosis (ALS) when he was just 21 years old, and a brain-computer interface was in his best interest.

ALS is a neurodegenerative disease that causes a gradual deterioration of the muscles and leads to difficulty swallowing, speaking and eventually breathing.

Because of the disease, Hawking had little control over his muscles, so he famously used a speech-generating device (SGD) to talk through a computer designed by Intel.

The software used by the computer moved a cursor across a keyboard which Hawking could stop with a twitch of his cheek once it reached the desired letter or word. Hawking used a complementary speech synthesiser that read the sentence once it had been approved or completed by the software.

The technology brought Hawking a long way, but scientists have continued to dream about more sophisticated brain-computer interfaces.

Hawking died in 2018, two years before the world's first brain-computer interface was implanted into a patient: the Stentrode, made by Synchron, an Australian-born, New York-based company.

The Stentrode interface - a stent-like brain implant - was awarded the US Food and Drug Administration’s ”breakthrough device” designation in 2020, and a year later Synchron became the first company to obtain FDA approval to conduct clinical trials on a computer-based brain implant.

The promise and hope of Synchron’s technology are clinically driven, with its main objective being to give independence to the people who have lost their physical independence.

How does a brain-computer interface work?

The Stentrode interface is a matchstick-sized, mesh-like device containing electrodes that’s implanted in the brain and is capable of picking up signals enabling the user to control external systems.

Synchron describes the Stentrode as a Bluetooth device that allows you to control your computer with your mind, thus enabling people with severe paralysis to carry out tasks such as writing, texting, emailing, shopping and banking online, through direct thought - and without needing open brain surgery.

The device does not require drilling into the skull, as it is simply pushed up through the jugular vein and into the brain. It uses blood vessels as a highway into the brain and laces the inside of them with electrodes that can record activity from the motor cortex of the brain, an area whose primary function is to generate signals to direct the movement of the body.

The patients are hence able to use their brain impulses to control digital devices without the need for a touchscreen, mouse, keyboard or voice activation technology.

How are these brain signals translated?

The team of scientists had to study the neural signals captured by the Stentrode device while participants performed specific movements - or thought about performing those movements - to later interpret them and translate them into a computer-friendly language.

So far, only a handful of people have received the Stentrode implant, but Wired reported in August that Synchron aimed to implant the device into 15 patients by the end of 2022.

The first patient to try Synchron’s brain-computer interface was a man called Graham Felstead; the second person was Philip O'Keeffe. Like Hawkings, both men suffer from ALS.

“This is a new horizon. It really is,” O'Keeffe said in an interview with The Economist, “having a direct link between your brain and your computer, it’s just another step down the path of human evolution”.

Synchron is currently carrying out a clinical trial funded by the National Institutes of Health, which will assess the safety of the Stentrode, as well as explore its efficacy on patients with severe paralysis.

Synchron is hoping that this tech will also allow to diagnose and treat conditions of the nervous system, including Parkinson’s disease, epilepsy, depression, and hypertension.