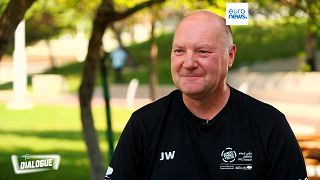 John Wroe explains the power of The Street Child World Cup to change lives on The Dialogue
By Didier Burnod  & Guy Shone  •  Updated: 28/11/2022

If football has the power to change lives, John Wroe is the man with the game plan. The co-founder of Street Child United is using the sport to help give a voice to the voiceless.

Back in the UK, John’s daughters talked about this experience during a school assembly. “A young girl put her hand up,” John explains, “and asked ‘why can’t street children have a World Cup?’”

John took that idea and ran with it. Now 12 years later, Street Child World Cup has seen its fourth competition, the biggest so far, held in Doha, Qatar. “It’s the first World Cup in the Middle East, so the hospitality has been quite phenomenal,” John says.

Football games may be the obvious focus, but Street Child United also helps to inspire real change in the children’s lives.

“Our job is to tell the stories of street-connected young people and refugees,” John enthuses. “We’re glad to be able to give a platform for these heroic young people to be seen in a very different light, to be seen as heroes.”

The children, representing 28 countries, are chosen by projects on the ground in their home countries. They use the tournament as a springboard to draw attention to the issues they face.

The Street Child World Cup platform allows their demands to resonate far beyond the forums they hold during the games. So much so, that the voices of street-connected children are now changing governmental policy.

“When Team Pakistan returned to Karachi after 2014, they were met by 7,000 people at the airport,” John says. “And when you’ve got the people of the country on your side, you can do great things.”

Great things, indeed. Team Pakistan went on to meet their country’s president, as did seven of the teams after the last games in 2018. That access to high-level officials has instigated real change.

The Street Child World Cup tournament in Qatar has also made waves. Three children chosen to represent Bangladesh were unable to participate. John says they "didn’t have their birth certificates” and therefore couldn’t obtain a passport. As a result, Street Child United lobbied the country’s Supreme Court, which demanded the government simplify the process of birth registration.

“And it has been simplified,” John reports, “this will have implications for 1.3 million street children…the fact that three children…can enable identity for over a million children in Bangladesh is quite phenomenal.”

"There’s a bit about the cup which is a fairy tale…you’re creating moments which are quite unbelievable.”

Qatar also has a particularly special role to play for some of the children. A few of those representing Team Bosnia and Team Sudan are orphans who have been sponsored by Qatari’s their whole lives.

“They are in touch with their sponsors…but they never, ever thought they would come to Qatar and be able to meet them,” John outlines. “There’s a bit about the cup which is a fairy tale…you’re creating moments which are quite unbelievable.”

For John this tournament is also about ensuring that all the children who take part, take something away with them too. “They have opportunities, they make friendships, they’re connected, they are no longer isolated,” he says. “I hope they will realise that their voices will be heard, that they matter, that they are somebody.”

“We say this is the ‘I am Somebody World Cup’ and you can see these heroic young people becoming somebody larger than themselves through the course of the ten days.”

Following on from the charity's success with birth registration campaigns in countries like Bangladesh and India, Street Child United is now launching a global campaign, 'One Million and One.' It aims to secure one million and one identities for children living in street situations between the 2022 World Cup in Qatar and the 2026 tournament in North America.

It's also looking ahead to giving more children a voice as part of the Street Child Cricket World Cup in 2023.

Meet the child chef cooking up a storm in Kenya