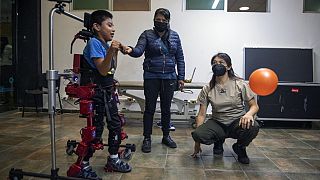 Eight-year-old David, who suffers from cerebral palsy, has difficulty moving his body and has relied on a wheelchair for years.

The neurological condition also caused him to become deaf. He communicates with his parents in sign language.

Now he enjoys playing with a ball and drawing as much as other kids his age - thanks to a new robotic exoskeleton.

"At first it scared him and his hands were very tense," said David’s mother, Guadalupe Cardoso.

This is David’s third time trying the Atlas 2030 pediatric exoskeleton as part of physical therapy sessions, and Cardoso can already see the improvement.

"I see that it gives his feet more strength and improvement in walking. He’s very interested in walking, he’s there taking his first steps. That's a joy for him. He’s very happy".

Also excited about modern technology are the therapists who patiently fit the wearable robot onto the children, cheering and applauding as their young patients make progress.

'Motivation to achieve many things in the future'

"It makes us very excited to have the exoskeleton and that we can even use it now to achieve all of this,” said 28-year-old physical therapist, Arturo Palafox Sanchez.

“It motivates us as therapists that we will be able to achieve many things in the future”.

Mexico’s Association for People with Cerebral Palsy (APAC) received the device two weeks ago and it aims to help at least 200 children with cerebral palsy nationwide.

After Spain and France, Mexico is the third country to offer treatment with the device.

"We are seeing results with the children, and we want to continue working and empowering, so that more children in the city and the country have access to this type of rehabilitation, because we are always receiving children who need neurorobotic rehabilitation and that radically changes their lives," said APAC director Guadalupe Maldonado.

According to Maldonado, the wearable robot helps achieve "in record time" the rehabilitation goals that would take months to achieve with conventional therapies, such as strengthening muscles and improving patients’ digestive and pulmonary systems.

But above all, she says the device provides a remarkable boost to their morale.

The Atlas 2030 paediatric exoskeleton is specially designed for children between 3 and 14 years old. It supports the child from the trunk to the feet without thoracic control.

Monkeypox: New research centre in the UK aims to curb the virus